1 How About a 3D Printer That Moves and Is Completely Autonomous?

4 This Four-Wheeled Robot Laughs in the Face of Gravity, Climbs Walls

5 Once Decapitated Hitchhiking Robot Will Be Forever Housed in a Canadian Museum
Car video reviews:
Coverstory

To think that only a few years ago Honda's ASIMO was the best example of a humanoid robot only goes to show how quickly things have evolved lately. This, in turn, makes us very, very curious about what kind of robots the people at Boston Dynamics will be poking with hockey sticks three years from now.
1 photo
For the moment, though, they have to settle for this next generation Atlas model. Compared to the previous one, the new robot is smaller, lighter and, naturally, more agile. But what does it do with this newly gained agility? Well, clearly it’s not enough to save it from all kinds of abuse.

To prove the self-balancing capabilities of the Atlas, Boston Dynamics engineers (or are they just hired thugs?) poke and hit the poor robot mercilessly. Don’t you just hate that guy with the hockey stick? He’s like the biggest bully ever. Hey, buddy, do you enjoy programming a robot not to fight back and then hitting it with a stick? That’s like every bully’s wet dream.

And then there’s that moment when the Atlas picks up some boxes and attempts to put them on the shelves, where they belong. What do the humans around it do? They knock the box out of his hands repeatedly and push the poor guy back. “Where do you think you’re going with that box, sunshine?”

It’s all done in the name of science, but we do fear that Atlas might be registering all this abuse and, as soon as it feels the time is right, it’ll strike back “with great vengeance.” No, seriously, we get it’s just a robot, but given its humanoid form, it’s easier to empathize. And just imagine for one second that instead of Atlas taking all the flack, there was the cute, little ASIMO. This video would have generated an online petition asking for those men’s heads, no doubt about it.

Probably the greatest advancement made by the engineers is the significant weight reduction of this new generation Atlas. If the previous robot tilted the scales at 330 pounds (150 kg), the new one is 150 pounds (68 kg) lighter, while still being wireless and completely autonomous. It’s 5’9” (175 cm), so you could say it’s got the constitution of a stocky medium-framed man. It’s equipped with a multitude of sensors that maintain its balance and uses a stereo camera system and LIDAR for visual guidance so it can operate both indoors and outdoors.

They still can’t be dressed up in human skin and pretend they’re Arnold Schwarzenegger, but we’re slowly and steadily getting there. Well, at least Boston Dynamics is. 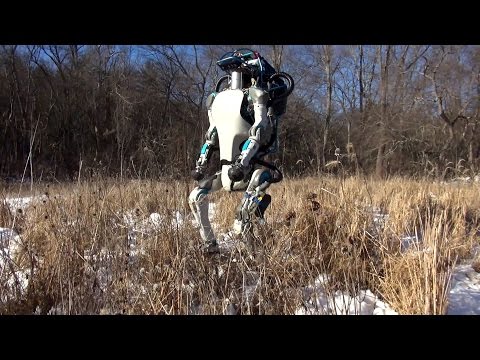