The Porsche 911 GT3 has never been the quickest or the fastest 911, yet it's the one that encapsulates the brand's spirit the best. It's about purity, about getting the most performance out of the tools at hand.
57 photos

In the all-new GT3's case, those tools are the 4.0-liter naturally aspirated flat-six engine and the absolutely sublime PDK double-clutch transmission that's probably the best in the business at this moment. It's hard and somewhat pointless to judge what is essentially a track car based on a simple video showcasing its acceleration, but trust us, if you have your headphones handy, it's going to be worth it.

That's because the 510 hp the engine makes may not seem like much by today's standards, but once you hear them at full blast, there's no turning back. Just like a classic Ferrari V12, the Porsche six-cylinder boxer engine sounds just incredible. Seriously, it will make you doubt all other means of propulsion mankind uses at the moment, from the excessively quiet EVs to the obnoxious superchargers and everything in between.

There is an undeniable purity about the sound the GT3 makes, the kind you won't find on any other road-going vehicle. That's because, by all accounts, the 911 GT3 shouldn't probably be on the street itself since it's nothing more than a thinly disguised race car with a full interior. You won't hear anyone complain about it, though. First, because not many people will, and second, because the voices of those who will are going to be muffled by the sound of six opposing cylinders banging like crazy to make the crankshaft spin at 9,000 rpm.

We said at the start that the GT3 is not the quickest or the fastest 911, but we sure hope you didn't take that as it being slow or anything. Officially, the PDK version will hit 62 mph (100 kph) in 3.4 seconds, but while other companies use one-foot rollouts and stuff like that to boost their numbers (and stock valuation, in the process), Porsche likes to understate the performance of its vehicles.

The GT3 makes no exception, reaching the target speed in 3.38 seconds on a regular surface with its stock tires. Even though it's a rear-wheel-drive car, the launch control feature will still plant the rev counter's needle firmly at 6,500 rpm. Well, it does redline at 9,000, so there's that.

When pushed, the PDK will shift just short of the 9,000 rpm mark, proving the red paint isn't there just for show. You could say that gunning for the sports car's top speed is "pushing it," so a lot of the shifts in the clip below occur at the 8,800-8,900 rpm mark, with the needle falling back to just about 7,000 rpm on each occasion.

The GT3 stops at 198 mph (319 kph) despite the fact the speed is reached in the top, seventh gear at just over 8,000 rpm. However, even with the nearly 1,000 rpm left unexploited, that also happens to be the model's official top speed, and if you think about it, it's more than enough. You won't be able to come near it on any track, and doing more than that on the road (or even considerably less) is also pointless. Besides, we can also imagine you also risk running out of fuel before reaching the next gas station. 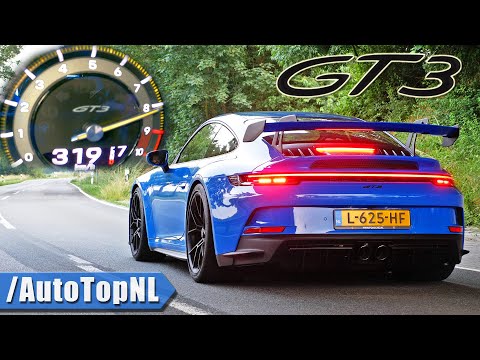