Watch an Opel Astra 1.2 Hit Its Top Speed on the Autobahn, Feel Free To Be Impressed

Home > News > U-turn
Sebastian Toma
If someone were to ask you the top speed of a compact class hatchback with a three-cylinder engine with just 1.2 liters of displacement, what would be the first value that popped into your mind? What if they told you that the car had 145 PS (142 horsepower)? Well, this video might surprise you a bit.
6 photos

A YouTube channel that takes various cars on top speed runs on the German autobahn has published a video with a 2021 Opel Astra K 1.2. As you may know, some sections of the German autobahn do not have any speed limits, which means that drivers are free to max out their speedometers as long as there are no bad weather warnings that do involve restrictions.

The latest video features a 2021 Opel Astra K with a 1.2-liter, inline-three-cylinder engine. The unit was introduced for the facelift of the Astra K, and it is available in several power levels. It starts at 110 horsepower, can be had with 130 horsepower, and the most powerful of the 1.2-liter motors can offer up to 145 PS (142 horsepower) at 5500 rpm.

Peak torque is 225 Nm (166 lb.-ft.), and it is available between 2000 and 3500 rpm. The only transmission available with this engine is a six-speed manual gearbox. Those interested in an Opel Astra K with a gas engine and just two pedals could only opt for an in-house-designed CVT, which was only available with a 1.4-liter engine that also offered 145 PS (142 horsepower).

While the facelifted version of the Astra was launched two years after Opel/Vauxhall was acquired by the PSA Group, the engines offered with the compact hatchback were designed in-house, as were the transmissions offered in the range, such as the CVT for the gasoline motors, as well as the nine-speed automatic for the diesel.

The manufacturer claims a top speed of 220 km/h (ca. 136 mph) for this version of the Opel Astra, which is more than enough from an inline-three-cylinder engine on a hatchback. As you will observe in the video, the Astra's speedometer will show more than its stated top speed, but this is normal, as all cars have a built-in speedometer error.

The vehicle did reach its top speed when the driver shifted from fifth gear to sixth gear. As you can witness, the vehicle struggles to accelerate past a certain point when it is shifted into sixth gear after being redlined in fifth. This happens because the ratio for sixth is “longer” to provide optimal fuel economy at highway speeds.

We do not think this example is overly optimistic, but it does display a speed that the vehicle cannot achieve. That should not stop you from checking out the video and then watching its ancestor, the Opel Astra F 1.6i, with just 75 horsepower on top, as it goes for its maximum speed.

As always, please do not attempt to replicate this on a speed-restricted public road. 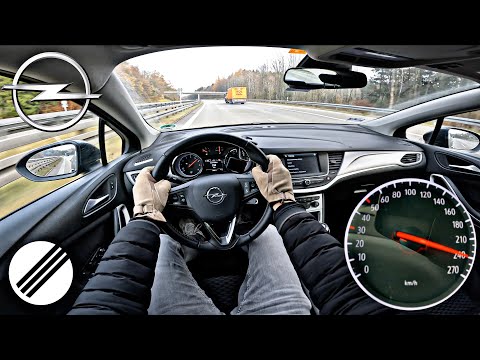 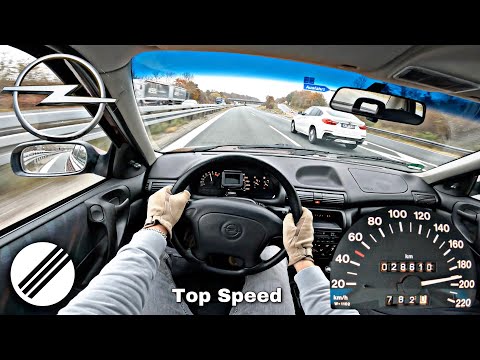 Editor's note: Please do not attept to replicate these videos on a speed-restricted public road. Drive in a safe and responsible manner.