The new Astra generation might be the last one made without PSA involvement.

The new Opel Astra is, actually, a direct competitor for its brothers, the Citroen C4 and Peugeot 308 from PSA.

The main focus was to lower the fuel consumption and the result is really good. They improved the figures a lot, lowering the consumption with an average 19% compared with the previous generation.

Even though the look is quite similar to its predecessor, the differences are quite extensive. Firstly, the aerodynamic factor is the lowest on the market, especially for the station wagon body variant. The value for the hatchback's Cx is 0.26, which is the same value as the former world-record held by the Opel Calibra back in the 90s, but that was a sporty coupe. The new value is a world-record for a hatchback. The station wagon's (called Astra Sports Tourer) Cx is even better, at 0.25.

The technical platform was developed by Opel and carries on one of the best half-independent rear suspensions from the market, a Watt's linkeage. For the engine compartment, Opel installed two 3-cylinder gasoline units, turbocharged, of 1.2 and 1.4-liters. They are offering 110 hp and 145 hp respectively. Two turbodiesels are offered, variations of the same 1.5-liter engine, with 105 hp and 122 hp, respectively.

For the transmission, Opel offers a 6-speed manual and a CVT with seven pre-set gears, which is said to be even smoother then any ordinary automatic gearbox.

For the interior, LCD-technology made its way to the instrument cluster and it is also on the infotainment display. Just like the previous generation, the refreshed Astra supports Android Auto and Apple CarPlay. 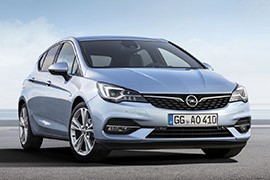