The overboost function also needs to be highlighted because it briefly offers 268 horsepower (272 ps). On a rather dusty surface that isn’t as grippy as tarmac, the Amarok recorded 8.07 seconds from zero to three-digit speeds.

Cars.co.za tested five more trucks to see, and none came close to the aging Volkswagen. The Mazda BT-50 with the J-series Isuzu 3.0-liter turbo diesel ranked second with 10.04 seconds whereas the Ford Ranger with the 2.0-liter EcoBlue bi-turbo diesel powerplant had to settle for 11.31 seconds.

In third place, the best-selling Toyota Hilux recorded 11.9 seconds with the 2.8-liter turbo diesel that was introduced six years ago by the Land Cruiser Prado. The fifth quickest pickup is a lesser-known fellow, the GWM P-Series that’s also known as the Pao, Poer, and Cannon. Manufactured by Great Wall in China and Thailand, this bakkie takes its mojo from a 2.0-liter mill with 161 horsepower (163 ps) and 295 pound-feet (400 Nm) of torque.

In this scenario, the Chinese truck needed 12.76 seconds to reach the 100-kph mark. Nissan came dead last with 12.84 seconds for the Navara with the 2.5-liter YD25DDTi High Power engine, a very old four-cylinder turbo diesel based on the YD25DDTi with the VP44 rotary injection pump.

Facelifted for the 2021 model year in South Africa and South America, the once-popular Navara will be discontinued from the European lineup at the end of this year due to declining sales. EV manufacturer Rivian was initially expected to buy the Navara-making factory in Barcelona where Nissan also produced the Mercedes X-Class. More recently, Great Wall has expressed interest in a possible takeover, but nothing has transpired so far. 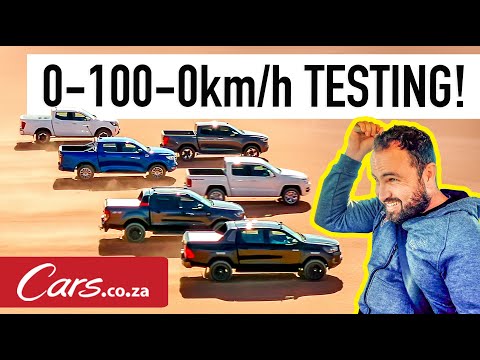