1 Buy a Penthouse, Get a Lamborghini Aventador, a Yacht and a Trip to Space

2 Blue Origin's Race to the Stars

Home > News > Space Junk
Daniel Patrascu
Earlier this week, Richard Branson’s dream of getting closer to the stars got another jolt, after his space-fairing company, Virgin Galactic, conducted the second, successful powered test flight of the new SpaceShipTwo.
8 photos

Called VSS Unity, the craft flew and made use of its rocket for 31 seconds at a top speed of Mach 1.9 and at a maximum altitude of 114,500 feet (35 km). The goal was to test the ship’s handling at supersonic speeds, as well as to check the control system’s performance while using the craft in a configuration close to the final commercial version.

Virgin Galactic released a video of the achievement – you can see it attached below - showing both how the ship performed during its flight but also interior images of the two pilots as they were piloting Unity.

“It was great to see our beautiful spaceship back in the air and to share the moment with the talented team who are taking us, step by step, to space,” Branson said in a statement.

VSS Unity is the second SpaceShipTwo in existence. The first, called VSS Enterprise, crashed in 2014 as a result of pilot error. The crash killed the man behind the stick and seriously injured the copilot.

Unity, as was Enterprise, is a space-capable ship that launches horizontally at 50,000 feet (15 km) from the underbelly of a two-bodied aircraft called WhiteKnightTwo. Launching from this altitude allows the ship to bypass the denser regions of the atmosphere and save fuel and money.

Virgin Galactic would use the Unity to fly private citizens into space. SpaceShipTwo flights are open to all those interested and are willing and able to pay $200,000 for a ride. The sum to be paid includes pre-flight medical checks and pre-flight preparation.

The actual trip to space would last around two hours, of which only six minutes would be spent in actual zero gravity. 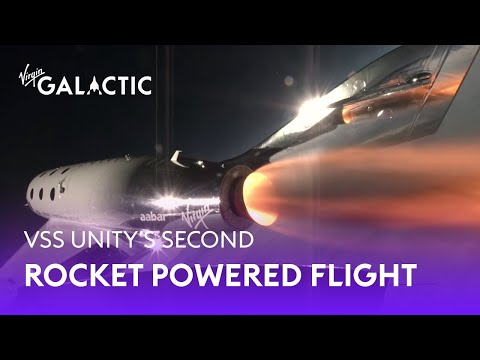