Shortly after man learned it is not impossible for him to take to the skies, the simple act of getting off the ground and sailing through the winds has become obsolete. Flying through clouds or above them, over cities and seas, soon became as plain as walking from home to work and, consequently, too common. In the competition-driven era of the 1950s and 1960s, two major powers, the US and the USSR, engaged in a very unlikely war, one which was not waged with rifles in the hands of soldiers, but with cameras in the hands of journalists. The exploits of each of the two powers in their space flight endeavors became the soap operas of the age, with millions tuning in to see which flies the furthest, the highest, the fastest. Yet, despite the boom in the aerospace industry in the middle of the last century, the appeal and money to further develop this field have diminished and outer space dreams have moved from government backed programs to individual enterprises, laudable, of course, but far less effective. There is someone however who seems to be making giant leaps in turning space flight into everyday business. His name is Sir Richard Branson and, as you know by now, he is the head of a 360 companies-corporation called Virgin. But this piece is not about him. This is about what may very well become human kind's first true spaceship, one which will carry tourists into outer space and, why not, the cornerstone of an industry of its own. Out of the 360 companies run by Branson, the one in charge with space flight is called (how else) Virgin Galactic. Established in 1999 as a response to the endeavors of the Rotary Rocket Company, Virgin Galactic came to be both as a means to provide sub-orbital space flights to the paying public and as the satisfaction of a personal eccentricity. Virgin Galactic's mission is to develop the space ships, the infrastructure and even the rules for space flight. Or, how the company itself puts it, "provide the catalyst for private sector innovation in the field of manned space exploration." BEGINNINGS

SpaceShipTwo, Zefram Cochrane Would Be Proud 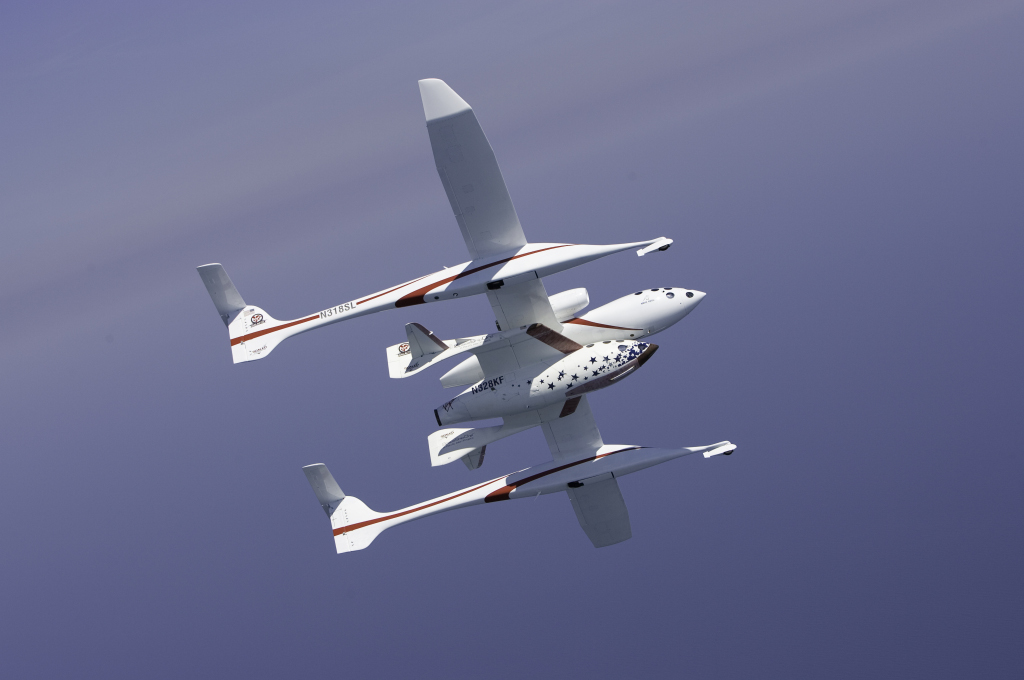 With the sights set on the Ansari X Prize announced in 1996 by Peter Diamandis (a $10 million grant for the first non-government organization to launch a reusable manned spacecraft), Virgin decides to invest in the so called SpaceShipOne, a spacecraft built by a company called Scaled Composites. The same project was being financed by Mojave Aerospace Ventures, a company owned by Microsoft co-founder Paul Allen.

In 2004, Virgin, Mojave and Scaled Composites agree that should the SpaceShipOne win the Ansari X Prize, Virgin would license key design technologies. In 2004, the official sponsorship of the SpaceShipOne Ansari X Prize entry is announced by Branson. Even more, Branson and Virgin commit to building a fleet of commercial spacecrafts.

SpaceShipOne wins the X Prize on October 4, 2004, after flying to 112 km, 12 km beyond the so called Karman line, the place where atmosphere meets outer space. It marks the real birth of Virgin Galactic and the start of the race to build the SpaceShipTwo.

In 2005, the joint venture between Virgin and Scaled, The Spaceship Company, is born, and the main directions of the project are announced: build the actual spaceship, SpaceShipTwo, and the launch vehicle, WhiteKnightTwo. 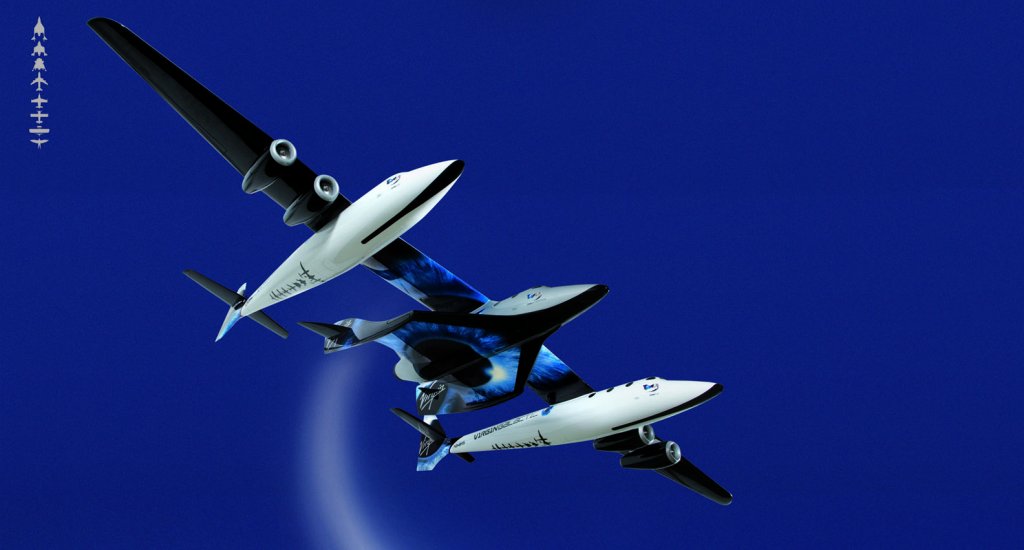 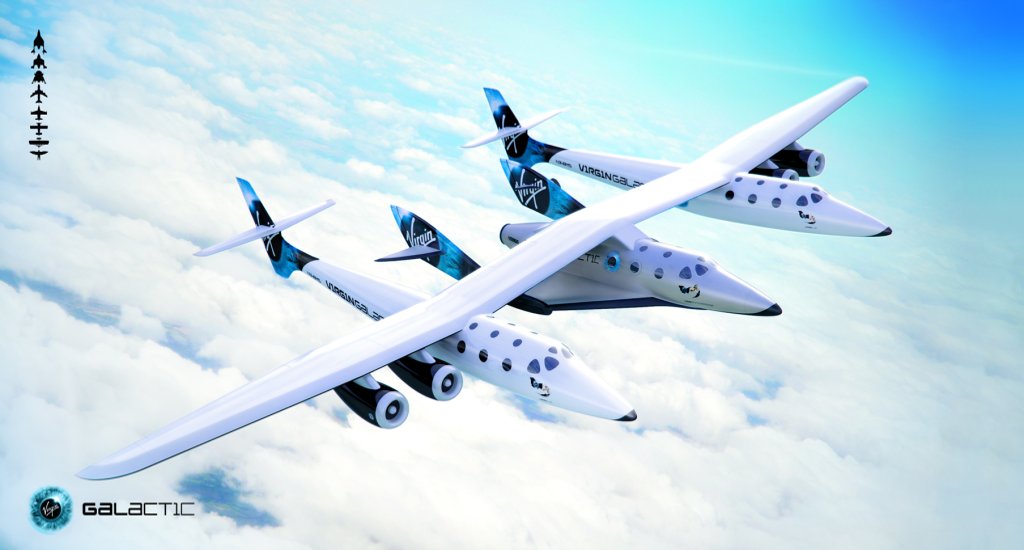 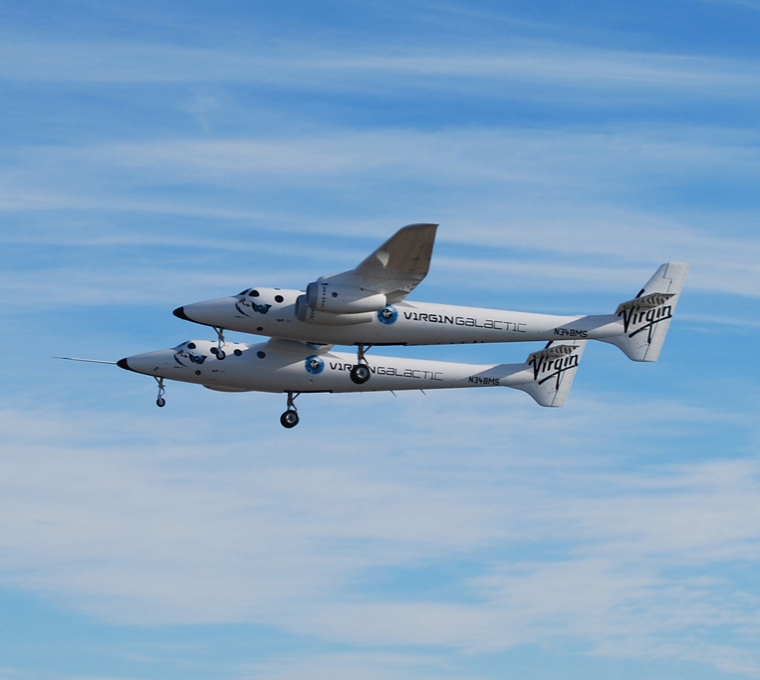 As you might have guessed, building a spacecraft without also providing it with the needed infrastructure is useless. This is why, in 2005, Virgin and the State of New Mexico announced a $200 million agreement to erect Spaceport America on a 27 square mile area in the south of the state.WhiteKnightTwo 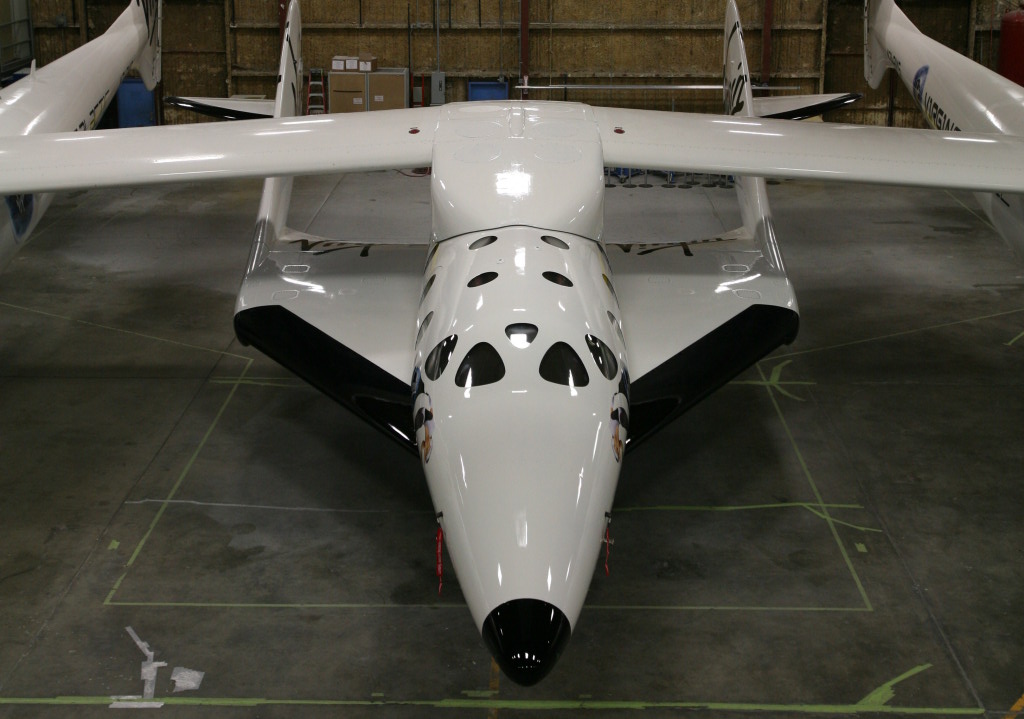 WhiteKnightTwo, the vehicle which is intended to carry SpaceShipTwo to the required altitude for it to launch, was unveiled in 2008 and set at least two records: it has become the largest all carbon composite aviation vehicle ever built and the most fuel efficient of its size. 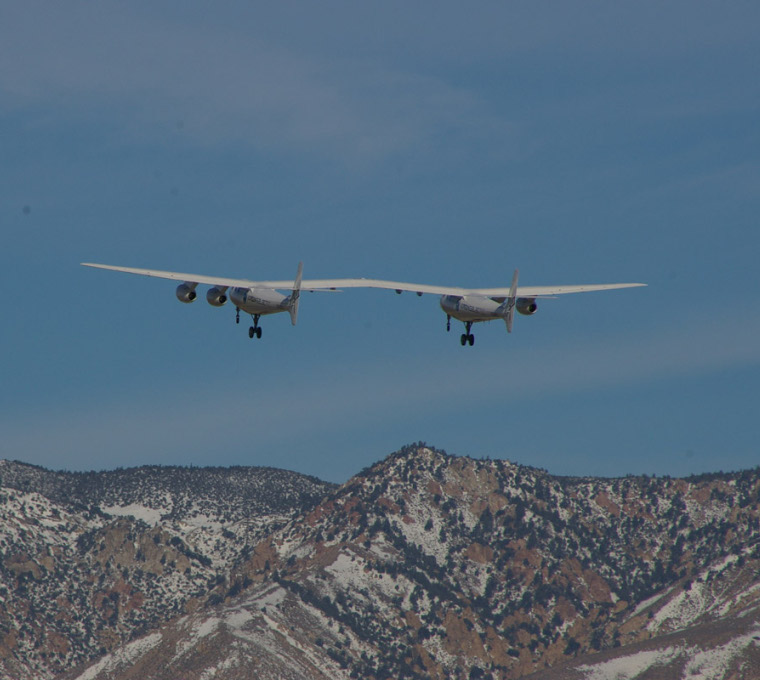 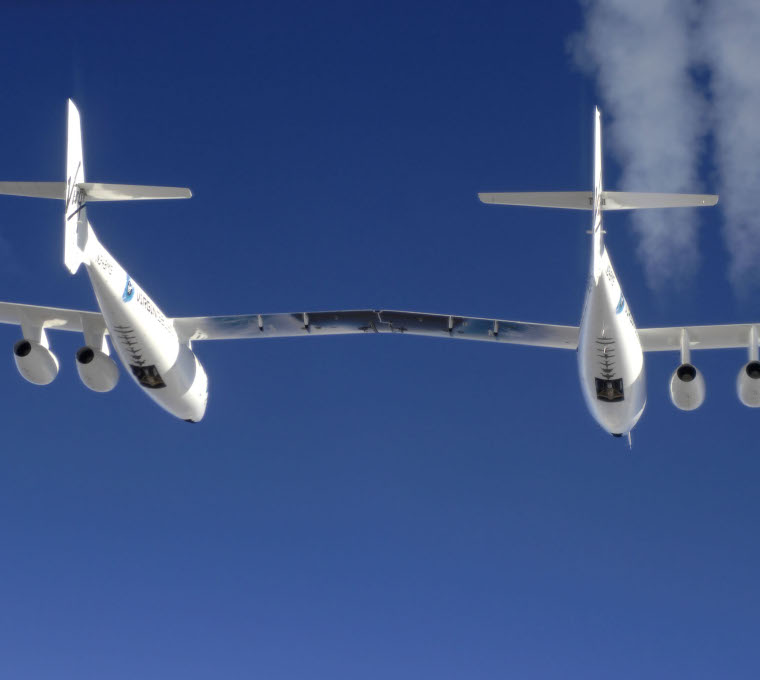 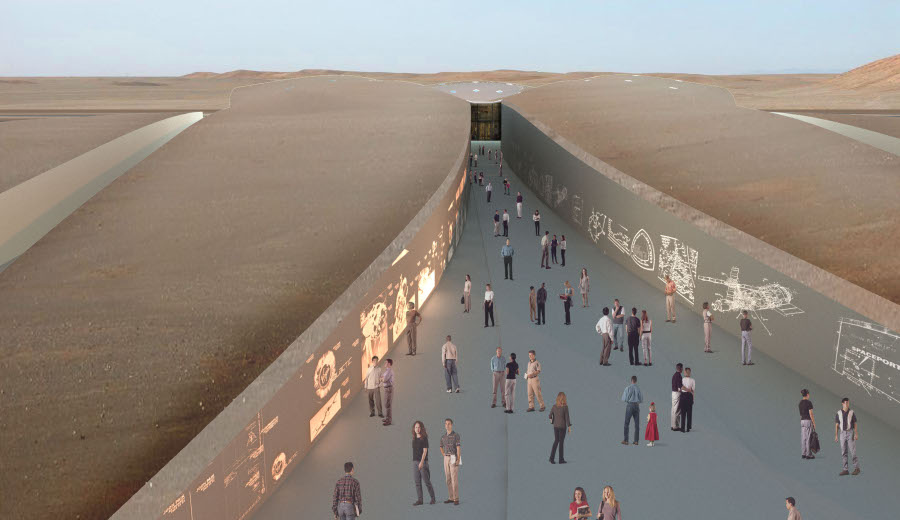 The strange shape of the airship is given by its twin fuselages, connected through an elongated w-shaped wing which spans for 140 feet (42.6 meters). The vehicle is capable of pulling tight 6g turns, making it an ideal training tool for the future pilots of the SpaceShipTwo. The fuselages themselves can also be used to transport people or, as you will see below, train them before an actual ride in the SpaceShipTwo.SpaceShipTwo 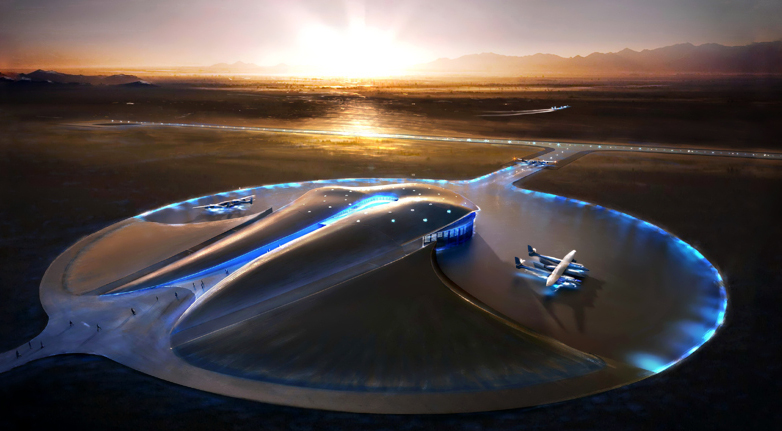 SpaceShipTwo is a spacecraft which launches horizontally at 50,000 feet (15 km) from the underbelly of the WhiteKnightTwo, a maneuver which allows it to bypass the denser regions of the atmosphere and save fuel and money. Twice as large as the SpaceShipOne and with a carrying capacity of six passengers and two crew, the SpaceShipTwo measures 60 feet in length (18 meters) and features a bullet-shaped cylinder as a cabin.

The vehicle is built, as is the WhiteKnightTwo, from carbon composite, four times the strength of steel and a quarter of its weight. This allows for unlimited fatigue life, easy modification and lightweight.

The wings on the SpaceShipTwo are built in such a manner that they minimize the risks in what is perhaps the most dangerous maneuver for space vehicles: re-entry. SpaceShipTwo uses a feathered wing configuration which allows the ship to rotate upwards to about 65 degrees, creating very high drag and allowing, probably for the first time in the history of space flight, a computer-free re-entry. Once the vehicle has reached an altitude of 70,000 feet (21 km), the wings come back down and turn SpaceShipTwo into a glider.

SpaceShipTwo is powered by a hybrid rocket motor which uses solid fuel (rubber compound) and liquid oxidizer (Nitrous Oxide), a solution which is said to be better then standalone liquid engines or solid motors.SPACEPORT AMERICA 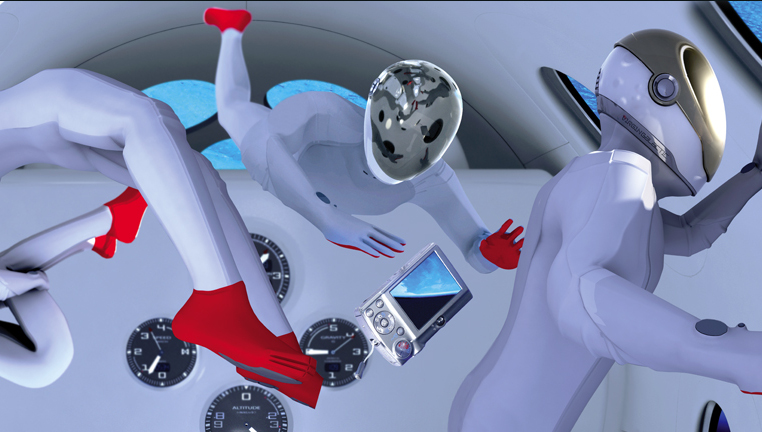 Designed by Foster + Partners, funded by Virgin Galactic and backed by the State of New Mexico, Spaceport America will become the first location on Earth from which space flights will take off, on a regular basis, with space tourists on board.

Its stunning shape, drawn to be reminiscent of the dimensions of the spacecraft itself, hides visitor spaces, control rooms, and all the facilities you see today in an usual airport, only more space-oriented. It will feature a 10,000 feet (3,000 m) runway, big enough to accommodate the WhiteKnightTwo.

Spaceport America broke ground on June 2009 and is currently being built as a state-of-the-art facility, relying mostly on renewable energy. The Spaceport itself will use earth-tubes to pre-condition the air, solar panels, in-floor hot water loop system for heating and skylights for illumination. WHO FLIES?
The pioneering work behind SpaceShipTwo is leading towards a single goal: making space flight common and available. In essence, anyone who wants and can afford to, can fly.

Basically, SpaceShipTwo flights are open to all those interested. Yet, Virgin Galactic has a few sets of rules which it will try to enforce, as well as a training program for wannabe astronauts. But let's take them one by one. 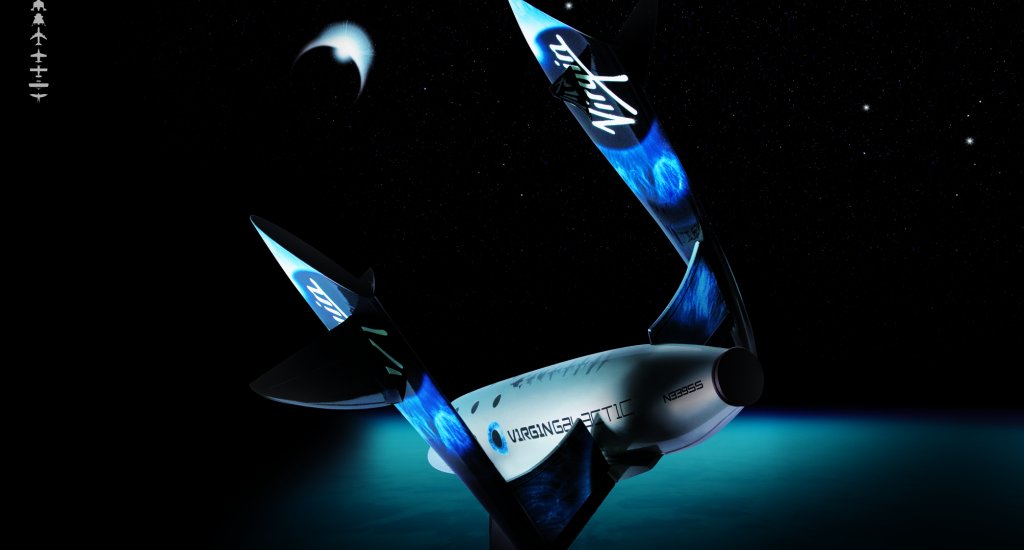 First of all, you would need to book a reservation on the SpaceShipTwo. One ticket costs $200,000, with deposits starting from $20,000. The booking can be done by following this link or by contacting any of the accredited space agents located on all continents.

After you book the flight and paid the deposit, you'll have to wait and get a call from Virgin Galactic, as they will let you know when the flight will take place. Unfortunately, there's no telling yet when that may be, as Virgin Galactic only reached the first captive carry flight stage this year. Anyway, we'll assume that special countdown moment is near, so we may continue with our presentation.

Virgin Galactic will do pre-flight medical checks on all those trying to catch a trip to outer space, out of concern for your safety. Of course, you need not be in tip-top shape as the pilots of today's space shuttles...

Following the medical check, Virgin will take you through 3 days of pre-flight preparation, teaching you how to feel comfortable in micro- and macro-gravity. The training will be done aboard the WhiteKnightTwo and will also cover basic emergency response. Videos of you screaming while in 0g will be shot and sent to your home, as a reminder of your exploits. 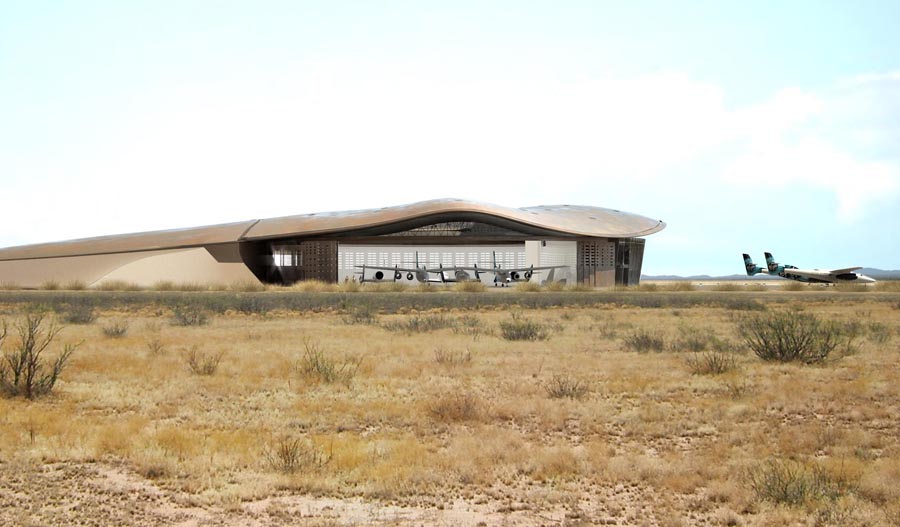 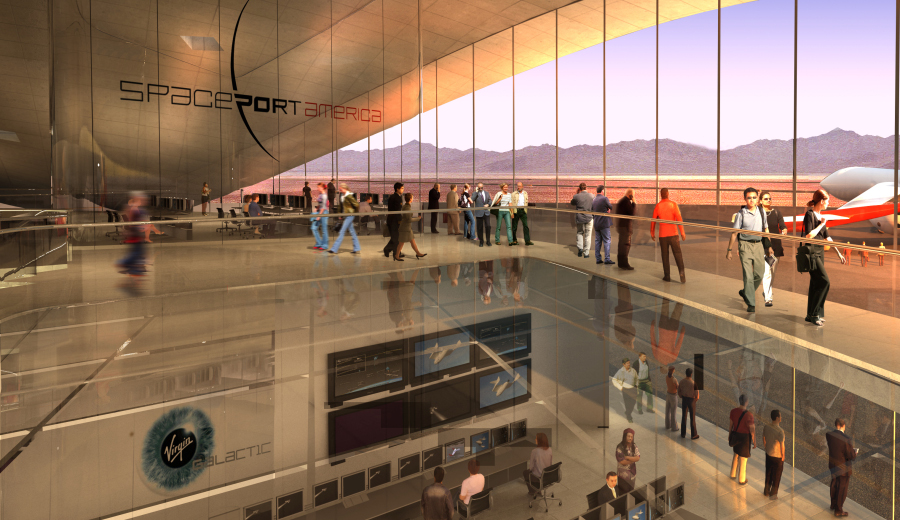 In the title of this piece, we kinda' placed Branson's quest to give a piece of outer space to the masses to Zefram Cochrane, Star Trek's ship's father, if you like. While Branson's SpaceShipTwo pales in comparison to Cochrane's fictional  invention of the warp drive, which propelled human kind beyond the borders of our galaxy, it will also become a trend setter.

SpaceShipTwo is yet to fly into outer space with tourists aboard. But when it does (and it will in the following few years), it will likely spawn or, if you like, inspire others to take up the same business. The competition which will then ensue will generate lower traveling costs and, perhaps, a situation similar to the one in the mid-20th century, only this time with corporations as main players. The goal: brake the final frontier...