Never mind the glitzy atmosphere on this video from the good folks over at Australia’s Motor YouTube channel. Actually, they had a rather chilling, therapy-inducing, dangerously close for comfort encounter with the end of the strip for this otherwise tame drag race battle. But let’s put things into perspective.
36 photos

This Aussie social media outlet focusing on all things automotive (hence the Motor name) is no stranger to drag encounters. Just recently, we’ve seen them pit the Audi RS Q8 through its paces against the AMG GLE 63 S or the little RS Q3 take a shot at glory against the AMG GLA 45 S. So, they have the proper experience, and they conduct the trials off the streets.

It’s just that for their latest skirmish, there’s a change of scenery (and a very cinematic lighting setup) that implied the use of some basic math. The result was that Motor's Lexus LC500 and the recently updated Jaguar F-Type testers would need a shorter strip of asphalt than usual.

That's why they chose to go for a 350-meter dash instead of the regular 400 meters, which is approximately the equivalent of the traditional quarter-mile. Even in these conditions, it’s still a tight fit because they have just 90 meters of braking space.

Naturally, before the action kicks off, there’s a little presentation so we can meet both competitors. We love when people do their homework, and although at first glance, it doesn't seem right to have a V8-powered LC500 (469 hp) against the V6-toting F-Type P380 (375 hp), it turns out the former’s extra pounds actually contribute to an equal weight-to-power ratio for both coupes.

One can judge all the cards provided by the hosts up until the 3:20-minute mark when it’s time for the battle to actually take place, regardless of their driver’s “genuinely nervous” condition. After all, the high-performance pieces of metal didn’t care that there was a slippery patch of grass at the end of the strip leading to a set of trees.

We’re not going to spoil the result, which officially comes out from the 4:40 mark after the guys enjoyed some much-needed “therapy,” but we can say that both cars were, in the end, dangerously close to running out of tarmac! 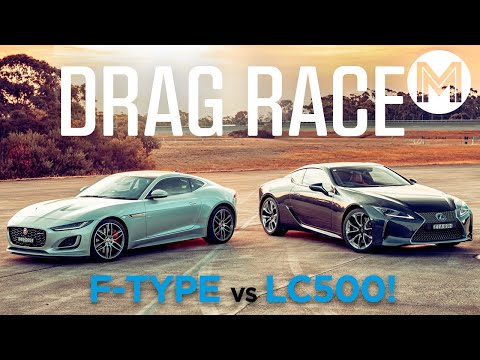