While it was no match for the German competition formed by the BMW M3 and the Mercedes-Benz C-Class AMG, the Jaguar offered a good balance between luxury, performance, and price.

Jaguar developed the XE as a direct competitor for the BMW 3-Series and the Mercedes-Benz C-Class. The carmaker offered it with gasoline and diesel engines, with rear- or all-wheel-drive. It was a premium compact sedan that had something for anyone, but there was the last piece to complete the puzzle: a sport version. And that was the XE300: the last piece of the puzzle.

From the exterior, the XE 300 Sport didn't look too much different than its siblings. It didn't feature any screaming for attention wings, or massive spoilers—only a small badge on the mesh-grille at the front and a slightly different front bumper. A small lip-spoiler was added on the trunk lid, but that was available for the rest of the range from the options list.

The interior featured sport-bucket seats with the XE Sport lettering embroiled on the headrests. Its black leather with contrast stitching was fitted as standard, an option that was not available for the rest of the range. But from the exterior, it was hard to notice that.

While the exterior tried to fly under the radar, the drivetrain was a different story. Jaguar dropped the inline-four Ingenium gasoline engine. Its turbocharged 2.0-liter provided 300 hp, which were sent in all four corners via an 8-speed automatic transmission. That said, it offered plenty of performance and grip on loose surfaces, especially for a daily driver. 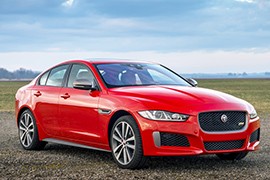