Aurel Niculescu
Back in late 2019 AEC Europe, the official importer for Dodge and Ram on the Old Continent, presented a highly limited edition of the Challenger SRT Hellcat. Simply dubbed “XR,” this Europe-exclusive muscle car trumps both the Demon and Redeye.
22 photos

Based on the stock Challenger SRT Hellcat Widebody, the Dodge XR was limited to just 50 units – so it’s understandably an exceedingly rare sight. A powerful one, though, as the company upgraded the factory performance ratings to no less than 888 horsepower and 999 Nm (729 lb-ft) of torque, so the Challenger was said to be capable of reaching up to 320 kph (199 mph).

What they kept under wraps was the traditional zero to 60 mph (96 kph) time, along with the ubiquitous quarter-mile performance. Now a new video courtesy of the Gumbal channel on YouTube comes to shed some light on the latter. Although we are still left without some key information regarding the exact distance used for the Interstate Drag Day 2021 event measurements.

Since we’re in Europe, there’s also no drag strip anywhere in sight. So, this could be labeled as an extreme take on the No Prep category, as the competition surface (most likely an airstrip) is not favorable to high-powered muscle cars. Nonetheless, there’s fun to be had even in these adverse conditions.

And with the focus squarely on the Dodge Challenger SRT Hellcat XR, there are 888 ponies to play with. So, first up for a skirmish comes a dark blue Ford Mustang GT. Obviously, on a proper quarter-mile drag strip this battle would have just one obvious winner – the supremely powerful Challenger. But in these conditions, the XR struggles to find the tarmac under its rear wheels.

This happens every time it meets an adversary (there are three races, from 0:30, 1:45, and the 2:47 marks), be it of the Mustang GT or Camaro ZL1 variety. More and more wheel slip ensues, and the XR always has to play catch up to its adversaries. But no worries, it still prevails in the end... 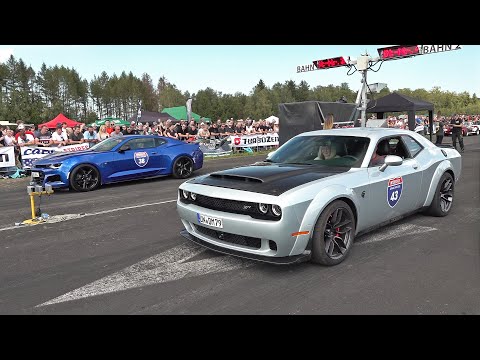