Aurel Niculescu
With the continued rise in popularity of the eighth installment of the Corvette, it’s no wonder many aftermarket component manufacturers are eager to see if the success rubs off on them as well. And the marketing departments probably know that you usually can’t go wrong when playing the anti-hero trope.
24 photos

Frankly, I wouldn’t like to hear the classic “be aware, the suspect is armed and extremely dangerous” when driving, but one can always appreciate the impact of the phrase... when it happens to someone else. Luckily for the driver of this white C8 Chevy Corvette, the tagline and the pursuing police SUV are all part of a ruse.

It’s a publicity stunt-type video created by a company called “The Pro Video” for Rohana Wheels. It imagines in a very cinematic way how the high-speed chase of the Arctic White C8 by law enforcement officers would take place somewhere in Los Angeles.

Naturally, since the chase is (many) times interrupted by cut scenes with the Corvette showcasing its assets while standing still, we can all imagine that even if the fake officers caught up with the driver, they were friendly and probably interested to know more about the set of bronze rims from Rohana Wheels.

Because of the paint job, these may or may not be everyone’s cup of tea, but as far as we’re concerned, they bring a touch of audacity to the whole build and match the interior hues quite nicely. According to the description on social media, the set of forged wheels are Rohana’s RFG13 series in a “Custom Polished Bronze” hue with 20 inchers up front and 21s in the back.

Better yet, these aren’t the only modifications on the Stingray Coupe. We clearly see the Corvette rides on an air suspension and has a bit of additional aerodynamic assistance courtesy of a stylish (and rather large) rear wing. Unfortunately, there’s just one detail that’s missing, as Rohana doesn’t offer any sort of pricing information for the set. 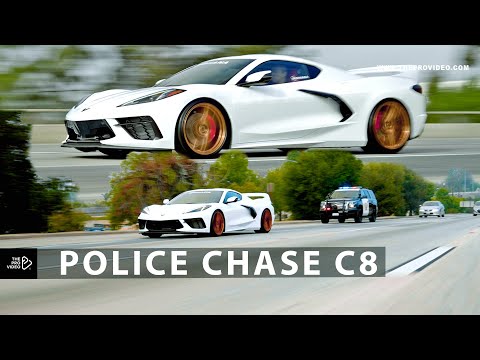