1 Ford Mustang GT vs. C 43 Drag Race Proves That Not All Mercedes-AMGs Are Created Equal

Hyundai’s 5 Millionth Car Built at Alabama Is a Santa Cruz, Pickup Got a Festive Skirt

Vlad Mitrache
Welcome to the latest installment of the Internet's ever-lasting series called "Absurd Drag Races Nobody Asked for, But Everyone Wants to See." There may not actually be such a series, but we all know somebody could make about 1,000 episodes if they had time to put all the videos featuring these strange matchups together.
10 photos

In today's episode, we get to witness the latest Volkswagen Golf GTI go up against one of its stablemates - well, we're looking at an extended stable that includes utility vehicles -, the Amarok one-ton pickup truck. Pitting these two against each other wouldn't be absurd but downright stupid if the Amarok came as standard, even if we're talking about a 3.0-liter V6 turbodiesel engine versus the GTI's 2.0-liter four-cylinder turbocharged gasoline unit.

Given the pickup's nature, its entire powertrain was never geared toward speed or acceleration. That's why this particular Amarok has had a tune - stage 2, according to the people behind it - bringing the output of its oil-burning V6 up from 255 to 322 hp. The maximum torque has also received a substantial bump: from 428 lb-ft (580 Nm) to 516 lb-ft (700 Nm).

The GTI's numbers pale in comparison, but it is still a hot hatch versus pickup truck drag race, so the Golf can make no excuses if it loses. Yes, it only has 241 hp (245 PS) and 273 lb-ft (370 Nm) of maximum torque and, unlike the Amarok which naturally has an AWD system, it sends its power to the front wheels alone, but it's a car that's supposedly been designed to go fast, so it should still be able to outrun a pickup truck, albeit a slightly modified one.

While we say that, a RAM 1500 TRX somewhere is smiling maliciously, but the Amarok is nowhere near the performance levels of the V8-powered T-Rex. It's far behind the V6-powered Raptor as well, both of which could eat the GTI for breakfast. So, all this hot hatch versus pickup truck talk should always be taken into context.

For all the disadvantages, the Volkswagen Golf GTI still has a few very important things going for it. One is the weight - 5,181 lbs (2,350 kg) for the Amarok, 3,225 lb-ft (1,463 kg) for the Golf; the second is the higher rev range; finally, there's the gearing, though this is only true assuming the Amarok's transmission has remained untouched.

As far as the actual races go, to put it in as few words as possible, let's just say they are "very one-sided." Using launch control, the Amarok has the advantage off the line, but the quarter mile proves to be long enough for the GTI to stage a comeback. Once the Golf driver ditches the launch control and goes for a manual start, its times improve even further.

The second race, in particular, is as tense as they come, with the GTI managing the tightest of wins. If a fly sat on the Amarok's bumper, we would be celebrating a different winner. We suspect the damp surface played in the Amarok's favor, but we're not complaining since it made the whole encounter a lot more exciting. See for yourself below. 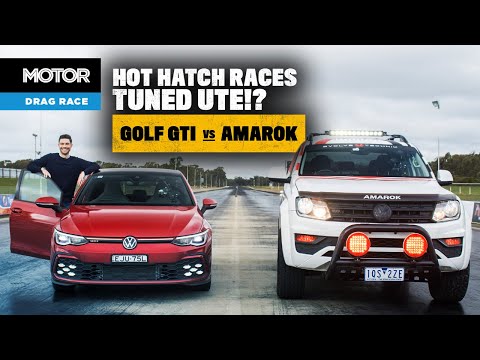