Have a wild guess which automaker is responsible for the most powerful engine that ever graced Formula 1. If you said BMW, you’re perfectly right because the M12/13 is reportedly capable of well over 1,400 horsepower.
173 photos

Back in the real world, the Munich-based automaker is well known for underrated output figures. Take, for instance, the bone-stock M3 Competition we’ve covered last year. Although BMW quotes 503 horsepower and 479 pound-feet (650 Nm) of tire-shredding torque, the dyno says it actually makes 538 ponies and 519 pound-feet (703 Nm) at the crank.

Given these circumstances, are you surprised the M4 Competition is faster than a bone-stock Toyota GR Yaris over the quarter-mile? The following video starts with the Japanese interloper launching off the start line very well, but clearly enough, the BMW has the last laugh over the finish line.

In addition to more displacement, double the number of cylinders, and one more turbocharger, the M4 Competition also happens to feature a much quicker transmission. The 8HP supplied by ZF Friedrichshafen is the culprit, and with the German automaker’s proprietary launch control, it’s far superior to the hatchback’s more driver-focused manual transmission.

With rear-wheel drive, the G82 is capable of hitting 100 kilometers per hour (62 miles per hour) in 3.9 seconds, while the optional M xDrive system cuts four-tenths off that estimate. Fitted with much narrower tires, namely 225/40 R18s compared to 275/40 R18s and 285/35 R19s, the three-cylinder turbo Toyota GR Yaris in Euro-spec trim needs 5.5 seconds for the same feat.

Even though it’s been soundly beaten, the ‘Yota is a handling-focused machine with plenty of WRC-infused goodies. The GR-FOUR AWD system, for example, is designed to offer a slight performance advantage over twin-coupling AWD or permanent all-wheel drive with a center differential. 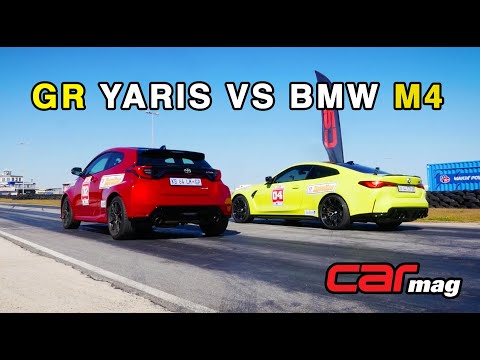