5 Tim Allen’s Ford Mustang for Sale on eBay
Car video reviews:
Up Next

Toyota TRD Sport Trailer Expands Into a Full Campsite, Gears Up for SEMA

Outside of the community of car enthusiasts, Tim Allen is maybe only a very affable comedian, actor, and celebrity, the kind you’d ask for an autograph that you’d forget at the bottom of the drawer once home. To car enthusiasts and collectors, Allen is a reputable collector with an excellent eye for American vehicles.
48 photos

One of these American-made beauties is now getting ready to leave Allen’s garage, after he sold it through a third party at auction on Bring a Trailer. It’s a rare and hard to get 2017 Ford GT that also happens to be almost brand new, with just 700 miles (1,127 km) on the odo and the only minor modifications of a Heffner titanium exhaust system and a protective film for the paintjob.

Because celebrity provenance adds plenty of value to most vehicles, the GT sold for exactly $1 million – and only four bids, which must be some kind of unofficial record of itself. That said, second-hand units of the GT can sell for as much as $1.8 million, because Ford is making only a limited number of them and the approval process is “like getting into Stanford” – Allen’s own words, and if a celebrity says it, you can imagine how hard it must be for regular folks.

Earlier this year, Allen gave the Petersen Automotive Museum a tour of his impressive garage, which, at the time, also included the 2017 GT. He called it his “silver spaceship” and admitted that, as much as he had wanted it before he got it, he had “mixed feelings” about it once he’d gotten to drive it. “In its element, I've never driven a more fantastic automobile,” he said, adding that it was, in essence, a race car for the road – and it came with the spartan interior and lack of comfort of one.

On that same occasion, Allen offered a future explanation for his decision to sell the GT. He said that none of the vehicles in his fleet were garage queens and that he kept only the cars he drove. Once he grew tired or bored with an item, he simply sold it and moved on to the next one.

Allen paid $485,500 for the Ingot Silver-painted 3.5-liter twin-turbo EcoBoost V6 Ford GT, so he made quite the profit off the sale. As of the moment of press, there’s some controversy over at BaT about how Ford needs to be more selective with the celebrities they sell to, lest they flip them for profit like Allen did with the 2017 GT. 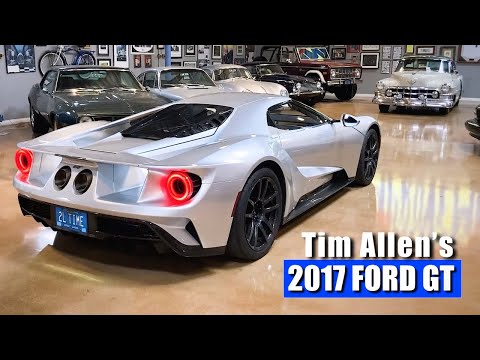