2 Official: Ford Returns to Formula 1 With Red Bull Starting From 2026

5 Is the CGI Return of the Ford Thunderbird as Scary as an M3/M4-Based Z4 Conversion?

Half a century after the magnificent 1-2-3 win at the 1966 LeMans race, Ford launched the second generation of the rejuvenated supercar Ford GT. The production started in December 2016 as a 2017 model year.

The new GT supercar features rear-wheel drive, a mid-mounted engine, and a two-door coupe body shell. It is propelled by a twin-turbocharged EcoBoost V6 producing more than 600 horsepower. It was packed with technology and covered in beauty. The sleek, aerodynamic bodywork has some particular details that can't be seen on other vehicles. The side pods, for instance, have the role to force the air to flow on the side of the body. Usually, car manufacturers are concerned about the above and underfloor turbulence. The GT managed to control the side turbulence.

Inside, the race-inspired cockpit hosts two bucket-seats, built with carbon fiber. They are light and slim. The SYNC3 infotainment unit was the most advanced connectivity system produced by Ford to date. Anchored by a carbon fiber passenger cell, the GT features aluminum front and rear subframes encapsulated in structural carbon fiber body panels. The windshield is made of Gorilla Glass, used for manufacturing smartphone screens.

The engine is a 3.5-liter twin-turbo V6 unit based on the Ford's IMSA Daytona Prototype for the endurance racing and it is rated at 647 hp. It is mated to a 7-speed dual-clutch transaxle transmission. 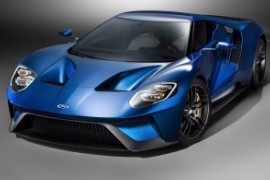