1 Xion CyberX Is the Cyberpunk Drive Of Your Dreams, Hits 50 MPH in Street Mode

2 Elettracker Is a Gorgeous, Modern Tribute to the Insane Board Trackers of Yore

Mama (and common sense) always said beware of things that sound too good to be true because they probably aren’t. In the case of the latest e-bike from British maker E Movement, the specs back up the impressive claims.

Thor e-Bike Launches as the Only Affordable High-Tech Bike, the Road Master

So maybe Thor really is as good as it claims to be.

According to E Movement, this is the “only” affordable high-tech bike in the world, the absolute “Road Master” that will “change the way you explore urban and rural forever.” These are very high claims, to be sure, and they would probably be enough to get you turned away from the project under different circumstances. But strip away the hyperbole and the PR talk, and you get the promise of a competent and high-tech bike, offered at an affordable, probably unbeatable, price.

Thor has just launched on IndieGoGo, where it’s offered to early pledgers at an introductory price of £1,100 for the 250 W version and £1,200 for Thor Ultra, which packs a 350 W motor. That’s roughly $1,530 and $1,670, respectively, for a fully equipped and ready-to-go e-bike with high-quality components. It’s basically the same price you’d pay for a mid-range e-bike.

E Movement is a British bike maker that offers various solutions for the urban commuter looking to lead a more sustainable and healthier lifestyle. They have commuter city bikes, folding bikes, off-road bikes, and e-scooters. Thor has spent the past two years in development and is the first product that combines urban and off-road riding capabilities. Whether it will readily change the way a rider experiences urban and rural riding, as it claims, remains to be seen.

E Movement has 250 Thor bikes ready in its shop, looking to send them out to riders in May, once the crowdfunding campaign ends. The idea is that, by offering them at half the retail price, it will generate enough interest in the new product to take it into mass production.

The highlight on Thor is the Bafang rear hub motor, offered in two variants depending on the country of destination. For residents of the European Union, it’s available with a 250 W one and an optional thumb throttle, while for everyone else, it can be shipped with a 350 W motor. The former variant is electronically limited at 15.5 mph (25 kph), while the latter reaches a top speed of 26 mph (42 kph) on throttle only.

Both draw power from a 10.4-Ah Samsung battery hidden in the downtube, with an estimated range of 50 miles (80 km) on motor-only and up to 80 miles (128 km) with pedal-assist. Thor comes with RST lockable hydraulic front suspension and shock-absorbing saddle, SRAM 8 Speed gears, and professional Logan Brake system (hydraulic brakes), which makes it a true multi-terrain, comfortable bike.

Thor also comes with a Bafang color display with password protection and a USB port for charging your phone when you’re on the move. The 27.5-inch wheels are wrapped in Maxxis Forekaster puncture-resistant tires, and the bike comes with integrated headlight and taillight, as well as front and rear fenders. With an aluminum alloy frame, the entire bike weighs 48 pounds (22 kg) with the battery included, which could be considered almost lightweight by today’s standards, especially for this kind of money.

Thor comes with an IP65 rating, which means it is water-resistant and dust-tight. E Movement recommends it for riders over 16 years of age, with a maximum payload of 330 pounds (150 kg). The first pledgers, who should be getting their e-bike in May, will also receive a bunch of freebies: a bike toolkit, a combination chain lock, a kickstand, and a bottle cage, with several other add-ons available for an extra charge. 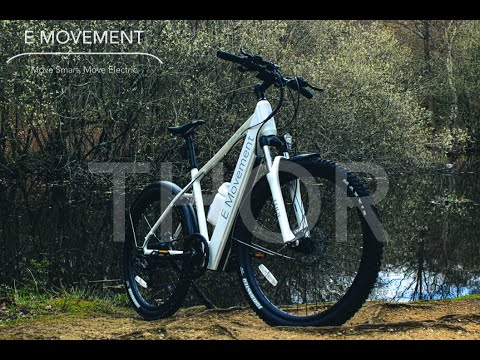