1 Italian-Engineered Beluga Drone Has Style, AI Capabilities, and It's Multi-Mission-Ready

Whether a VTOL drone can be used as a civilian or a military one it's up to other people, but those who made the Atlis designed it to lift and carry hundreds of pounds attached to it and fly a few hundred miles.
8 photos

Just looking at the news and seeing what's left behind by a storm or a vicious army makes us believe that sometimes humanity needs a simple device to deliver food, water, medicine, or other supplies to our stranded siblings that are fighting tooth and nails for their lives. Just imagine that this drone could deliver goods in the middle of the ocean to an offshore rig or to a community stranded after the bridge across a river collapsed.

Aergility has already been working on this drone for some time, and if last year it managed to create the prototype, this year it will show it at the 2022 XPONENTIAL in Orlando, Florida, on April 25. The Atlis uses the company's patented Managed Autorotation technology that allows it to fly up to 600 miles (967 km). It can carry up to 500 pounds (226.8 kg) inside its 40 cubic foot (1,132 liters) bay. The bay can be opened from behind the aircraft to ease the loading and unloading.

The Atlis hybrid UAV uses six fixed-pitch, nine-foot diameter electric rotors for takeoff and landing. At the same time, the forward propulsion is made by a 90 kW (121 hp) multi-fuel engine. The same engine recharges the batteries for the six motors, and the aircraft's lift is provided by a small cord wing and by the airflow through the rotors. The same principle of autorotation is applied to autogyro aircraft.

Aergility Atlis UAV performs vertical takeoffs and landings, so it doesn't need special surfaces. It can use any scrap of land it can fit on, a roof, or even a boat. Its only downturn is the internal combustion engine, which produces some noise. 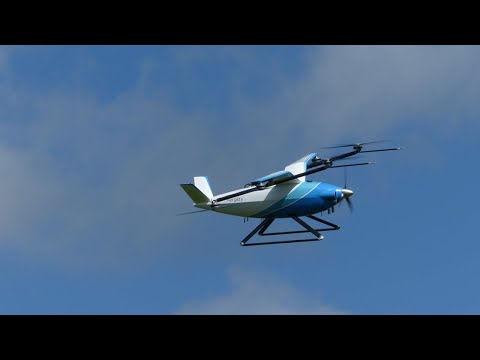