We’ve come a long way when it comes to drone development and we can now use these small but bold aircraft to gain access to hard-to-reach places and perform various activities in a much safer and more convenient way. But there’s still room for improvement and there are still limitations to overcome. The HUUVER is one promising solution that claims to activate both flying and driving capabilities in a single, compact, autonomous machine.
8 photos

Described as a hybrid UAV (unmanned aerial vehicle)/UGV (unmanned ground vehicle), the HUUVER is a concept created through the joint effort of seven organizations from five EU member states: Poland, Finland, Spain, Czech Republic, and Austria. The project was initiated in 2020 and is funded via EU's Horizon 2020 research and innovation program. HUUVER's developing team has recently shared a video with a “final demo” of the product. Several other prototypes have been developed and field-tested up until now.

The HUUVER doesn’t come with a spec sheet yet, but we do know that it uses a technology that allows it to “combine two types of propulsion systems in a compact and highly integrated autonomous drone”, to quote its developers. Its purpose is to serve as a flexible platform able to ace both ground-based and airborne missions. The drone can operate on the ground, climb, perch, fly, and take-off/land vertically.

A server-based app connects to the HUUVER, allowing the user to plan missions and control the drone, which will be fully integrated with the Galileo global navigation satellite system. An additional mobile app will act as an extension to the server-based application and will be compatible with both iOS and Android devices. It will let users check the drone’s availability, locate it, call it to perform a rescue mission, check the health of the system, and more.

The team in charge of developing the HUUVER is constantly working on improving and tuning the drone to make it suitable for applications such as search & rescue, patrolling, monitoring, industrial intralogistics.

There’s no word yet on when we could actually see the HUUVER on the market or how much it would cost. 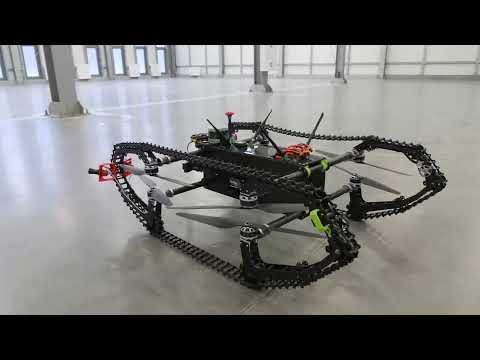