3 The Irony of Wales’ First Floating Hotel That Sank

4 Welcome to Wayaland, the City of Floating, Solar-Paneled Pyramids

5 Here Is the World’s First Floating Eco-Lux Hotel Suite, Worthy of a Bond Villain
Car video reviews:
Up Next

If you can’t go to church, the church will come to you. At least in London, UK, it will.

One of the most recent and unorthodox projects from Denizen Works is one commissioned by the Diocese of London: a barge with a pop-up roof that will serve mainly as a floating church, or gathering space for a variety of purposes, if need be. It’s called Genesis, after the first book in the Bible, and it’s a study in simplicity, elegance and functionality.

Commissioned by the Dioceses of London, Genesis represents a collaboration with Turks Shipyard and naval architect Tony Tucker. It was completed in March this year, on a £650,000 (roughly $850,000) budget, and was inspired by the iconic and old Volkswagen bus with a pop-up roof. Genesis too has an extendable roof, which adds to the available space below while also making the barge able to float down the London canals and pass under all bridges.

For the time being, Genesis is moored on the River Lee Navigation at Queen Elizabeth Olympic Park, where it will remain for the next three to five years, before it will start floating around to reach other canalside communities. For the time being, it serves two parishes here.

The idea behind Genesis was to build a barge that would be functional and elegant, and serve canalside communities for the next 25 years. While its main purpose is that of a mobile church, it can also be used by schools, rented out for different functions, and used for a variety of gatherings – whether they’re yoga and pilates classes, parent-children groups, or lunch and supper clubs.

Functionality is achieved through modularity and a simple, timeless design. Inside, under the pop-up roof, there’s room for 40 people sitting or 60 people standing. There are build-in lateral benches and stowaway plywood stools and foldable tables by local design company Plyco. Denizen Works also designed the altar, which resembles the prow of a boat with its angled-front face and can fold down flat for easy storage when not in use, freeing up space.

In addition to the main hall, there’s also an office, a kitchen and a toilet at the rear. However, the highlight is the extendable roof, which deploys at the touch of a button and was inspired by the VW Bus and organ bellows.

“It has been crafted from concertinaed, translucent sailcloth, and is lined with LED lights and powered by hydraulic rams,” Denizen Works explains. “When fully raised, the roof will transform the barge from compact and low-lying, allowing it to pass beneath bridges, expanding into an illuminated beacon designed to capture attention and attract footfall to the mission. Operated by the touch of a button, in its raised position it increases the head height of the barge to 3.6 m [11.8 ft] at its highest point, creating a dramatic interior which is accessible to all.”

Genesis is 8.5 meters (27 feet ) long and has a total floorspace of 60 square meters (645 square feet). Certain maritime motifs are obvious throughout, like the marine-style bulkhead lights and the aluminum window screens, which replicate sail stitching, creating an intimate, comforting interior.

Denizen Works doesn’t offer more details on Genesis, such as propulsion. Seeing how it will stay moored for the next five years, at the most, that part is not even very relevant at this point in time.

Genesis isn't the first or the only floating church / chapel, but it stands out for sheer simplicity and modularity, which enhances its functionality. 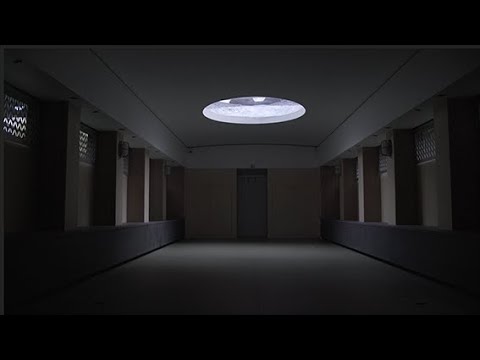 The Lousy Omen of Schelswig-Holstein: The Battleship That Unfurled the Bloodiest War Ever