Mircea Panait
The 1932 Roadster is an old favorite among hot rodders, and this fellow here is testimony to that. Not only does the Deuce feature fiery red flames and pinstriping over glossy black, but the engine compartment is home to a small-block V8 from Chevy.
26 photos

Offered by Vanguard Motor Sales for almost $50k, the open-top street rod doesn’t shy away from chrome garnish and red wire wheels that match the leather upholstery’s color. Plenty of louvers for the four-piece steel hood, plenty more lovers out the back, and a dual exhaust system with Flowmaster mufflers and round tips are also featured.

Both the block of the 5.7-liter engine and 9.0-inch Ford rear end with an open differential are painted red, and the powerplant further sweetens the deal with shorty headers for low-rpm performance. A billet aluminum pulley system, polished aluminum valve covers, air cleaner, and overflow tank are a few other highlights.

An “absolutely immaculate” interior according to the selling vendor, the 1932 Roadster boasts red carpeting, bench seats, leather for the aluminum steering wheel’s rim, a Lokar shifter, Classic Instrument gauges, and a lot of billet aluminum. The black soft top is obviously removable, and the underside is a work of art in its own right thanks to the Pete & Jake’s frame and chromed suspension.

Super Bell is responsible for the front axle, there are coilovers out the back, and the undercarriage doesn’t feature a single speck of rust. VIN 18274916 is mated to a three-speed automatic transmission – a TH350 to be more precise – and shows only 15,263 miles (24,563 kilometers) on the odometer since the project was completed.

One of the most interesting details of the 1932 Roadster is the celebratory metal tag that marks the 75th birthday bash of the Deuce, a gathering where the Flathead V8 was also celebrated. The engine that democratized V8s in North America lived on until the 1950s when the Y-block family took over with 130 horsepower from 239 cubic inches (3.9 liters) of displacement. 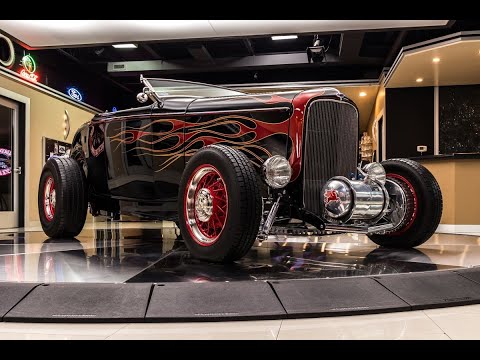