3 Someone Offered to Pay for Kevin Hart’s Trip to Space, and He Still Refused

4 Reinvent Your Seaside Vacations With the Warm, Cozy Beachy Trailer

The perfect vacation doesn’t have to mean choosing between two of your favorite things, if these happen to be hitting the road or sailing. The Sealander caravan is somehow able to combine both these things, and to do so in one tiny but still comfy-looking and stylish package.

Amphibious vehicles are not that uncommon, and neither are amphibious caravans. There’s something about the possibility of traveling by both land and water that both travelers and companies find irresistible. Amphibious caravans, for instance, have been around for decades, and Sealander is also a fixture on this very narrow niche of the caravaning market: the German company introduced the first version of the recreational vehicle in 2014 and has since upgraded it to one complete vacation solution.

We covered a Sealander upgrade in late 2019, but since August is Travel Month here on autoevolution, what better time than today to revisit this tiny but competent caravan?

Sealander is designed and build exclusively in Germany, so you get the much prized German quality and reliability. With it, you also get the “first serial-produced floating caravan in the world,” a tiny recreational vehicle that can be towed by most regular passenger cars without a special permit, and then launched on water without any red tape and much fuss. Designer Daniel Straub aimed for ease of use in its creation: he wanted something every regular Joe and Jane could use on both land and water, store when not in use, and with minimal maintenance and headaches.

On land, Sealander is an unbraked caravan under 750 kg (1,654 pounds). On water, it’s a category D motorboat with whatever choice of an outboard engine you want, as long as it’s not heavier than 30 kg (66 pounds) or more powerful than 9.87 hp. Sealander offers a choice of outboards, both gasoline and electric, so, if you want and, more importantly, if you can afford it, you can opt for the electric one and sail with minimal carbon footprint.

Due to its size and its light weight (the caravan is made of fiberglass reinforced plastic), you can tow the Sealander even with a smaller vehicle, with the only limitation being of speed: a maximum of 100 kph (62 mph). Lowering it into water is a matter of a few minutes and some crafty maneuvering, especially if you don’t have a rearview camera. You strap the outboard engine aft and then back the vehicle down the ramp until the caravan is in water; unhook the caravan and tie it down to a dock until you’re ready to sail away, and you’re done.

Naturally, the camper is fully sealed and, as Caravan College established way back in 2017 (see the 8-minute mark in the video below), incredibly stable once out on the water. Two men leaning and pushing on the same side could not get it to topple over, so that means you have no reason to worry even if the weather turns bad unexpectedly.

The space inside is small but comfortable, practical and, to a certain extent, quite posh. You have panoramic tinted windows on three sides, the opening on the fourth and a foldable roof up top. This means that, if you want, you can open it up completely to tan yourself or stargaze at night. You have two benches and a small table, with seating for up to six people. Or you can use this space as a bedroom as well, adding a topper on the table and creating a two-person bed.

Near the entrance, you can add options that would make your trip even more pleasant: a cooking module on the right and a sink on the left, with a portable toilet hidden in one of those storage spaces and a cooler Dometic module on the opposite side. You can also throw in some extra cash for an outdoor shower on the aft deck, or even a grill that goes on the railing there. All these are tiny but they’re more than enough for an extended weekend for two.

Further optimization includes an upgraded onboard battery, solar panels, a fly screen, an audio package (what’s a vacation out on the water if you can’t blast your favorite tunes, right?), a marine package, and a wide array of choices for interior materials and colors.

“The obvious advantage here is that you can combine two ways of traveling,” designer Straub said a while back. “It offers many more possibilities. When you have a boat and a caravan, you have to decide which one you want to use. What we offer here is the freedom to do what you want where you want.”

Yes, but this kind of freedom doesn’t come cheap, and this is where the Sealander is similar to other amphibious vehicles, be they cars or caravans: it’s expensive. The basic vehicle is €24,950, which is roughly $30,000 at the current exchange rate, and that’s without all that stuff you’d need for a vacation. Throw in the topper slash bed extension, the toilet, the kitchenette, and the works, and you’re looking at an additional €5,500 ($6,540). This doesn’t include the battery upgrade or the outboard engine. 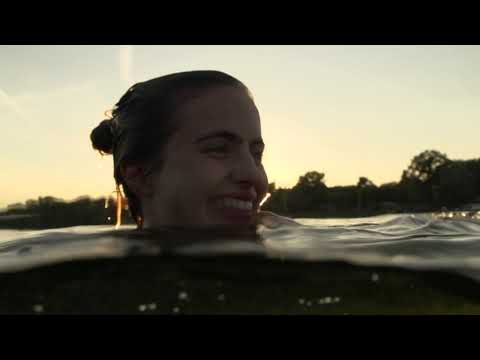 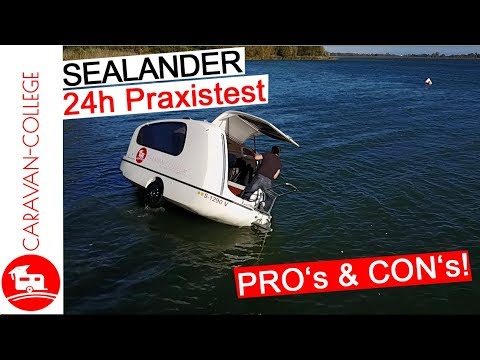