3 The Cutest Royal Race: The Sussexes Take the Passenger Seat in Electric Mini-Defenders

4 The Queen Mobile: The Electric Golf Car Queen Elizabeth Uses to Get Around Windsor Castle

5 Kate Middleton and Prince William Use the Same Ride as the Queen in Jamaica, a Land Rover
Car video reviews:
Coverstory

If we’re to believe cliches, there are a few things the Brits can’t do without, and they include tea and scones, bad weather, and an undying, almost obsessive love with gardening. The love of gardening is something Queen Elizabeth II knows a lot about.
12 photos

The Queen is patron of The Royal Horticultural Society and, on the occasion of the Chelsea Flower Show, times to coincide with ongoing Jubilee celebrations that mark the 70th year of her reign, she made a surprise appearance. Because the event involved the Queen walking through gardens as she was presented with new displays and flowers, the Queen Mobile was brought out for its first official appearance.

The Queen Mobile is like the Popemobile, but for Queen Elizabeth. Reports that she had gotten an electric golf buggy first started making the rounds online at the end of March this year, when the public learned that she had mobility issues that would impede her from one of her favorite activities: walking her Corgies. Nothing comes between the Queen’s love of Corgis, so the buggy was commissioned and delivered to Windsor Castle.

It was a Garia luxury golf cart, non-street-legal but fit to accommodate Royal backsides of all shapes and sizes. The Queen got a custom version of Garia’s Courtesy four-seater, which was designed in partnership with Mercedes-Benz, and aimed to rival passenger cars in as many aspects as possible.

The Queen Mobile made an appearance at the Chelsea Flower Show, where it rolled slowly through ten gardens, while the Queen was provided commentary by the RHS President Keith Weed and was introduced to new exhibits. Painted bright white, it comes with plush leather seats in light beige, and seating for six people, including the driver.

The standard model from Garia has a top speed of 43 mph (62 mph) and a per-charge range of 50 miles (80 km), which is nothing to write home about by regular EV standards, but more than enough if you’re going to walk the dogs in it around your vast estate. It also has a fridge, cup holders, entertainment screen and Bluetooth speaker system, as well as weather protection. Factory-stock, the buggy sells for $81,000, but the Queen Mobile has been “adjusted” for Her Majesty’s comfort, according to reports. 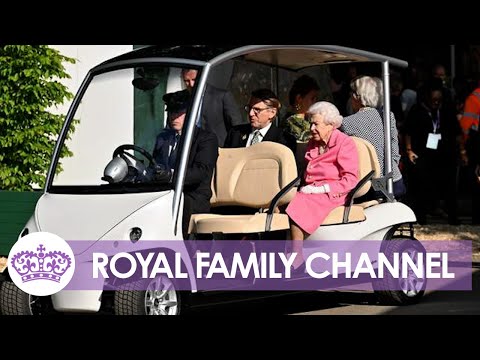 ???? The Queen, Patron of @The_RHS, visits the annual Chelsea Flower Show at the Royal Hospital Chelsea.

Established in 1913, the show is one of the world’s greatest showcases for horticultural excellence, attracting visitors and exhibitors from across the globe.#RHSChelsea pic.twitter.com/XjHoYUz9qo