2 Meet the Cizeta V16T, The Supercar that Should Have Been a Lamborghini

3 1993 Cizeta V16T From the Sultan of Brunei’s Collection Emerges in the U.S.

The Only Cizeta Moroder V16T Is for Sale Again, After Its Maker Passed Away This Year

Tudor Serban
RM Sotheby's received the Cizeta Moroder V16 T prototype earlier this year, but the seller took it back before the auction. Now, the seller tries again, and the car is going under the hammer on the 2022 February 27 auction.
11 photos

But what is Cizeta Moroder? You may be forgiven if you never heard about this Italian supercar since only ten of them were ever built, and one was this prototype. Sure, it is a running version, not just a show-car with no engine and interior, but since it's the first produced, it should be the most valuable.

When Lamborghini asked Marcello Gandini to pen the Diablo, he made a beautiful, aggressive vehicle. But it was too much for the Italian carmaker and it adjusted here and there some bits and pieces, which infuriated the design master. But his dreams of seeing his vision rolling on the roads were not done yet.

Meanwhile, across the Ocean, a former Lamborghini test driver and engineer by the name of Claudio Zampolli had a small shop in LA. It was there where he met one of the greatest musicians of those times, the Italian-born Giorgio Moroder, who was also a car aficionado. They teamed up and contacted Gandini, who used Diablo's original design sketches. The name Cizeta came from three initials that stood for Claudio, Zampolli, plus the T that stood for the T-shaped drivetrain setup. In Italian, these three letters were spelled Ci-Ze-Ta. As for the Moroder, that's obvious.

Zampolli came with the idea of installing a revolutionary drivetrain with a V16 powerplant made out of two V8 engines mounted head to head and the five-speed manual gearbox perpendicular between the crankshafts. That engineering solution was so bold that nobody had tried it ever before or after. Thanks to the 560 hp, this supercar could rocket to 100 kph (62 mph) in 4.5 seconds with a top speed of 328 kph (204 mph).

What is more important is that Moroder, a three-time Oscar winner and considered the father of Disco music, was a wealthy man. But after Zampolli built the car, the two partners parted ways in 1990. Thus, this prototype you see here is the only vehicle that sports the Cizeta Moroder brand. All of the others were named just Cizeta V16T.

On July 7, 2021, Claudio Zampolli passed away at the age of 82, but his legacy remained, and this Cizeta Moroder chassis number 001 is proof. When he worked together with Gandini on creating the car, and especially the cabin, he specifically asked for a very simple dashboard layout. There were no-nonsense dials in the instrument cluster. There was a big speedometer and another white dial for the tachometer.

Zampolli also took great care of the details, and the said vehicle sports a refreshed, red leather interior. The car you see here also went through a restoration program performed by Canepa Design in 2018, so the end result is not just a piece of automotive history but a performance supercar. A vehicle that could beat Lamborghini Diablo. Unfortunately for Zampolli, sales were way slower than expected, and in the end, he made just nine other vehicles plus this prototype. 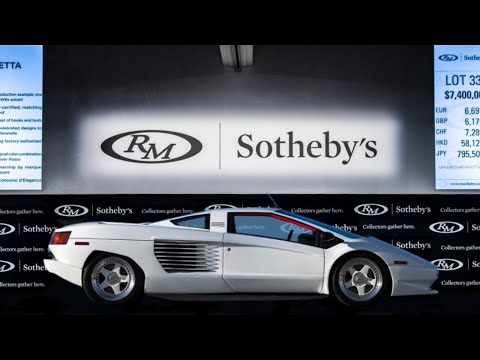