1 Midnight Madness in Miami: How L'Automobile Show Gets Made

3 Dodge Viper Was a Bold Dream Car, Turned Into Reckless Sports Car When It Became Real

Beautiful though it may be, the Miura doesn’t hold a candle to the audacity of the Countach. The Raging Bull of Sant’Agata Bolognese continued the wedge-shaped legacy with the Diablo, the first production Lamborghini to exceed 200 miles per hour (320 kilometers per hour).
7 photos

One of the most desirable models in the lineup is the SV, which premiered in 1995 at the Geneva Motor Show with rear-wheel drive. Rated from the factory at 517 PS (510 horsepower) at 7,100 revolutions per minute and 580 Nm (428 pound-feet) of torque at 5,900 revs, the Lamborghini Diablo Super Veloce is the halo car of the Need for Speed III: Hot Pursuit video game.

The blue-painted model in the following video is a 1997 example with more than 37,600 kilometers (23,364 miles) on the clock, which is plenty enough for such an uncomfortable car. To whom it may concern, driving a Diablo is nothing but hard work due to heavy steering, a heavy clutch, and a touchy accelerator pedal that’s certain to take inexperienced drivers by surprise.

Despite the odometer reading and the venerable age of the vehicle, the Diablo SV is a pokey thoroughbred. With 95-octane gasoline in the fuel tank, the scissor-doored supercar lays down 492 PS (485 horsepower) and 581 Nm (429 pound-feet) of torque at the rear wheels. Hearing that engine crack the 7,000-rpm mark is one thing, but driving this car in anger is a wholly different type of automotive nirvana. The burnout at the beginning of the video and the onboard footage after the dyno segment are glorious in their own right, more so if you remember how rare the Diablo Super Veloce actually is.

From 1995 through 1999, Lamborghini sold a total of 346 examples. The Diablo ended production in 2001 with 2,903 units to its name. Its successor - the Murcielago - is the final Lamborghini to feature the Giotto Bizzarrini-designed V12 engine introduced in 1963 by the 350 GTV concept. 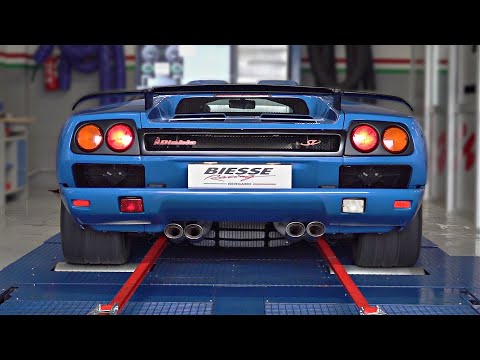