1 Taur, the Tough e-Scooter That’s a Class Above All Kickscooters

There is still room for improvement and innovation in the already crowded space of electric two-wheelers. If you’re looking for something that delivers in terms of convenience, ease of use and looks, the new EKOOTER might just be the thing for you.

The EKOOTER Foldable e-Scooter Is Ridiculous, Practical and Cute

The EKOOTER, from UK firm Ekoo, is described both as a sitting, foldable electric e-scooter and “the world’s first cylinder fold concept e-bike.” It’s not an e-bike though, since it doesn’t have pedals. In fact, Ekoo seems to take a lot of pride in delivering a two-wheeler that provides transport without breaking a sweat. Pedaling is so yesterday!

Removing the pedals also makes sense because it eliminates the space the rider would have needed in order to use them, leaving a compact two-wheeler that makes for easy carrying and storage. And that’s the EKOOTER’s strongest selling point: a compact form for easy carry. But everything else about it is worth a look, too.

EKOOTER is now crowdfunding on IndieGoGo (hat tip to New Atlas), in the hope it might go into mass production. Ekoo promises a powerful, reliable and highly versatile two-wheeler that’s both unique in design and tough. It’s cute, it claims to be incredibly convenient and it’s deliciously ridiculous.

With a frame of aircraft-grade aluminum alloy, the EKOOTER rides on 14” tires and is IP76-rated for heavy-duty protection such as water resistance. Its S-shape frame allows for easy folding when you need to carry it to your destination or on public transport, using the handlebar to pull it like you would a troller. When traveling, the rider sits in the seat, with the feet on the footpegs under the frame. These double as wheels for carrying when folded, troller-style.

The rear wheel folds into the frame from one side, and the front folds in from the other. For an even more compact size for storage, the stem of the handlebars also collapses, so you can pack it neatly into a closet or the trunk of your car. Folding and unfolding this two-wheeler is a matter of no more than seven seconds, according to the makers.

Powered by a 350W rear hub motor, the EKOOTER can take you up 18-degree inclines, and travels at speeds of up to 25 kph (15.5 mph), which is the max speed allowed in most EU territories. Ekoo offers two battery options: there’s the standard model, with a removable 10.4 AH Samsung battery and an estimated range of up to 62 miles (100 km), and the light version, with a removable 7 AH Samsung battery that delivers a maximum range of 40 miles (64.3 km). Either is decent, considering you won’t be putting any effort into it.

The makers say a full charge is achieved in two to three hours, and range can be further extended by carrying an extra battery with you. They plan to offer backup batteries as an extra, of course.

Stopping power is offered by a mechanical disc brake in the front and a drum brake in the back. For extra safety on the road, the EKOOTER comes with front and rear light and incorporated brake lights. Stats and settings control are available through the “crystal clear monitor screen” on the handlebars.

With a total payload of up to 270 pounds (120 kg), the EKOOTER itself is comparatively lightweight. The makers say the standard version tips the scales at 39 pounds (18 kg), while the Light version is, well, lighter at 35 pounds (15 kg).

EKOOTER costs £549 ($708 at today’s exchange rate) for early backers, with Ekoo promising a Christmas delivery for those who pre-order the first units and a February 2021 one for everyone else. When and if it reaches mass production, the full price of this foldable e-scooter will nearly double, at £999 ($1,290). 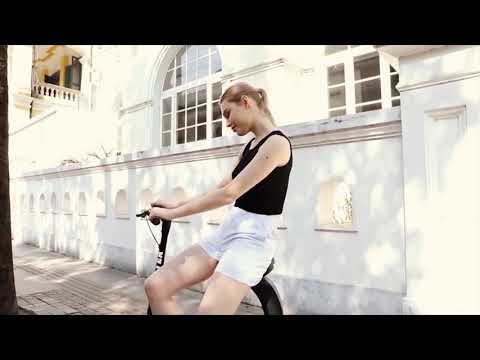