2 Bugatti Chiron SS 300+ Is Officially Dead, Final Copy Gets Delivered to Its Owner

4 Bugatti Chiron's Successor Will Be Heavily Electrified, Still With a Combustion Engine

5 The Bugatti Bolide Concept Is Going Into Production as a Track-Only Toy
Car video reviews:
Up Next

Taylor Swift Is the Real “Climate Criminal” With Her Private Jet Use, New Research Shows

There are plenty of gargantuan engines in production these days. The Chevrolet ZZ632/1000 comes to mind, a big-block V8 that puts out 1,004 ponies and costs more than a new Silverado 1500. Be that as it may, nothing really comes close to the W16 masterpiece from Bugatti.

The story of the 64-valve powerplant begins in 1997 with Ferdinand Piech. A few decades earlier, in the early 1970s, the grandson of Ferdinand Porsche was instrumental in the development of a 16-cylinder mill for the 917. Although a working prototype of the flat-16 was produced, the automaker eventually decided that a flat-12 with twin turbos is the ticket.

The stillborn flat-16 never left Piech’s mind, though. Once the Austrian engineer was elevated to the position of big kahuna of the Volkswagen Group, he pursued other marques, including the Raging Bull of Sant’Agata Bolognese. Romano Artioli’s revival of Bugatti went south extraordinarily fast, and Piech was much obliged to scoop up the struggling automaker.

Ettore Bugatti famously said that “if comparable, it’s no longer a Bugatti.” Taking inspiration from the company’s founder, as well as the 16-cylinder engine developed by Ettore many decades earlier, Piech decided that Volkswagen’s revival of the marque needed a standout powertrain with more cylinders than the competition had to offer. That’s how the first and only series-production W16 was born, out of the ambition of Ferdinand Piech.

Former head of technical development Gregor Gries fondly remembers that “no one really believed there could be a vehicle for the road that boasted 1,000 ps [986 imperial horsepower]. We had to engage in basic development for every component,” he recalls. “Every vehicle part had to be constructed anew and tested, even the engine test bench. We felt like Ettore Bugatti back in the day. He too always developed his own tools.”

Drawn on an envelope by Piech while traveling on the Shinkansen high-speed train from Tokyo to Osaka, the W16 would be no bigger than a V12 because this design combines two VR8s at an angle of 90 degrees to one another. The VR8 in question is directly inspired by the VR6 introduced by the Volkswagen Group in 1991. As the name implies, the VR6 is a narrow-angle V6 engine with one cylinder head covering both cylinder banks.

It would also weigh a little more than 400 kilograms (882 pounds), including the turbochargers. Then head of engine development Karl-Heinz Neumann was tasked with designing this behemoth. “Back then, there was no literature or empirical data for production engines with more than 12 cylinders or for production vehicles that could go faster than 350 km/h [217 mph],” relates Neumann. “One thing proved to be a particular headache.”

What headache? “The vehicle had to stay grounded, its power had to stay on the road – which isn’t easy at these speeds. But proving it was possible to construct an engine that could deliver this was incredibly cool. There was a real sense of fulfillment when the W16 was finally up and running.”

The herculean endeavor came to fruition two years later at the 1999 Geneva Motor Show. The Bentley Hunaudières design study, not the series-production Bugatti Veyron, premiered this powerplant in free-breathing format. Rated at 632 ps (623 horsepower) and 760 Nm (561 pound-feet), the naturally-aspirated W16 was connected to a five-speed manual instead of the Ricardo-developed DCT used in the Veyron and subsequent Chiron.

Later that year, at the 1999 International Motor Show in Frankfurt, the 18/3 Chiron designed by Fabrizio Giugiaro of Italdesign was presented to much critical acclaim. Although it sported a 6.3-liter W18 rather than the 8.0-liter W16, the Volkswagen Group knew that 18 cylinders are way too many.

More than 3,500 parts, each assembled by hand, came together in perfect harmony for the first-ever test of the series-production W16 in 2001. The quad-turbo lump surpassed the 1,000-ps mark on its first run. Specially designed for this application, the Ion Current Sensing system detects knocking and misfires. Depending on the severity of the knock or misfire, the ignition timing is slowed, the cylinder deactivated, or boost pressure reduced.

As expected of such a tremendously large powerplant, it gets hot really fast. Bugatti had to engineer a complex water-cooling system that features two water cycles. No fewer than 40 liters (10.6 gallons) of water flows through the high-temperature cycle, with three coolers in the front end. The low-temperature cycle is rocking 15 liters (approximately 4 gallons) of water that cools the turbochargers’ heated charge air in two heat exchangers.

Bugatti also had to find room for coolers tasked with the engine oil, transmission oil, differential oil, and the air-conditioning system’s heat exchanger. Can you believe the Veyron packs 10 radiators in total?

Remember the 18/3 Chiron design study? The French automaker from Molsheim revived that nameplate for the Veyron’s heir apparent. Taking its name from Monegasque racing driver Louis Chiron, the second iteration entered production in 2016 with 1,500 ps (1,479 horsepower) under its belt. Torque had also gone up to 1,600 Nm (1,180 pound-feet) at 2,000 rpm.

Now part of the Bugatti-Rimac joint venture, Bugatti is currently developing a heavily electrified hypercar that will succeed the almighty Chiron and its derivatives. “I'm an EV guy, but a Bugatti should still have a combustion engine for some time,” said CEO Mate Rimac. The W16 will be unfortunately retired, as confirmed by the attached press release from Bugatti. 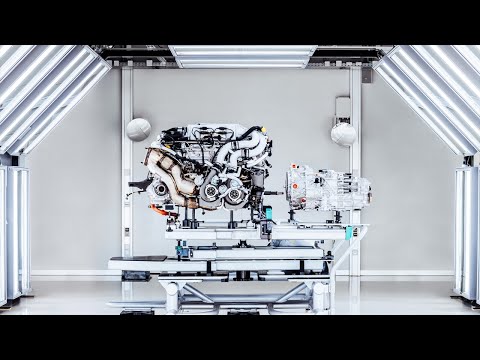