After the Bugatti brand was reborn in the late '80s, the French brand now under Italian ownership produced, apart from the EB 110, a more powerful version named EB 110 SS.

The new owner of the Bugatti brand was the Italian entrepreneur Romano Artioli, and after he successfully launched the EB 110 exactly 110 years after the birth of the famous Ettore Bugatti in September 1991, he insisted on creating an upgraded version. Thus, in 1992, at the Geneva Motor Show, the EB 110 SS was unveiled.

Based on the same bodywork and carbon-fiber chassis as the EB 110, the SS version featured a slightly different styling. While the front fascia remained similar, with the same small horseshoe-shaped air intake in the lower part of the bumper, the area behind the doors was changed. Thus, instead of small, triangular windows, the carmaker installed aluminum panels with five round air intakes. Out back, the car featured an adjustable wing that increased the downforce at high speeds.

The interior was stripped from the luxurious items installed in the regular EB. A pair of carbon-fiber sports seats fitted with four-point harnesses reminded the occupants that the SS version was not an ordinary supercar. Moreover, the instrument cluster received a carbon fiber panel that supported the dials and gauges. Last but not least, a Momo race-inspired steering wheel completed the racy atmosphere of the supercar.

Behind the cabin, the quad-turbo V12 engine was squeezed to produce 52 more PS (51 HP), resulting in a total of 612 PS (603 HP). That oomph was still sent in all corners via a six-speed manual gearbox. 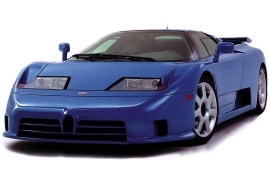