1 Blast from the Past: That Time Lexus Put Ice Wheels on the NX to Show Off

1965 Datsun Fairlady “SR20DET” Looks Like a Hoot to Drive

Not that there is much doubt about it among car enthusiasts, but custom work is art. British designer and customizer Andy Saunders is proof of that.

Tetanus Cord Proves Custom Work Is Art, Without a Doubt

As part of autoevolution’s Custom Builds Month coverage, we’ve already discussed a couple of Saunders’ most famous projects: the MINI HaHa and Claustro Phobia, another MINI that held the Guinness World Record for the lowest car. If these two builds did not get you thinking “wow, this is art!,” Tetanus will.

The name might not be very artsy, but this build is a monument of sophistication and elegance, artistry and wild creativity. Tetanus Cord, or Tetanus for short, started out as a 1937 Cord 812 Westchester sedan and came with a very interesting history. It belonged to royalty and then came very close to becoming a race car, before being suddenly and mysteriously abandoned on a field for decades.

An original right-hand drive export model meant for the UK market, the Cord was sold as new by R.S.M Automobiles of Berkeley Square, London to the Earl of Derby, according to Saunders’ official webpage. The Earl drove it for a few years before deciding to part ways with it: Saunders believes it had developed a gearbox problem and the owner probably thought buying a new one was less of a hassle than having it fixed. Rich people mentality.

The second buyer, though not royalty, was also a very well-known figure of that time: Jerzy Wojtowicz, former WWII fighter pilot and a fixture in Stock Car Racing. Wojtowicz wanted to turn the Cord into a racing machine, so he set out to perform a variety of modifications on it. He made the car RWD and put a Ford flathead engine under the hood.

Since he wanted to race the car, he was presumably going to weld the doors next and perform other body modifications, but he never got around to it. He simply dumped the car on a field in Yorkshire, where it would spent the next 50 years – 20 of which would be listed for sale without being able to attract a buyer. In the meantime, nature took over and local kids damaged whatever survived from nature’s attack, using the car as a “trampoline.”

Saunders found it and, despite the terrible condition it was in, saw the potential in it. The friend he was with at the time accidentally gave it the now world-famous name, saying he “wouldn’t touch that without a tetanus [shot].”

It would be another 14 years before Andy could introduce Tetanus in all its glory to the world: the official presentation happened in August 2017 at the Supernationals in Bedford UK, and is available in the video at the bottom of the page. On the design alone, Saunders estimates to have spend some 7,000 hours, before he found the perfect “recipe” for a vehicle that was different from the original, but still retained that timeless elegance.

The result is a two-tone gray, two-door coupe with blood red interior that just screams timelessness. And audacity. Inspired by an image he once saw on a postcard, Saunders chopped off the rear of the sedan, widened and reworked the wings, lengthened the doors, lowered the roof and rebuilt the rear end using parts from a Volkswagen Beetle and Jaguar Mk2. The coffin nose now hides a Chevrolet V8.

Tetanus is considered to have raised the bar in the world of Kustoms in the UK. Asked what Kustom means to him (with that exact spelling), Saunders himself defined the term as “the only word to describe a period, authentic 1940s or 50s Kustom or any other car that has received major body work to make it more beautiful than it was when it left the factory.”

Tetanus is all that. It’s also proof that, as Saunders is wont to say, “customization is art.” Where he is concerned, as long as he has the budget and the time, there is nothing he can’t do. 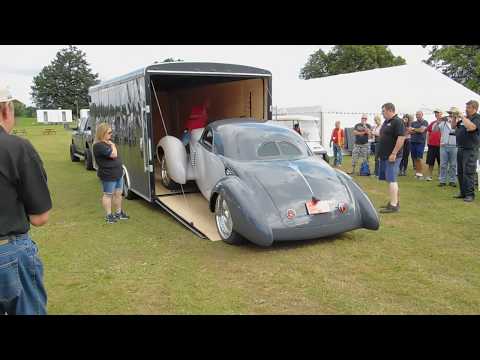 Trek's 920 Touring Machine Is No Longer Being Built, but Some May Still Be Hiding in ShopsSee all coverstories