Here’s one for you, if you ever thought a MINI is way too roomy with all that space in the back: a MINI half the size of a regular one exists and it’s actually a very famous custom build. Cute, but famous – and still in proper working condition.

The MINI HaHa Is the Tiniest Thing, Can Do Wheelies in Reverse

It’s called the MINI HaHa and it looks exactly like the name suggests: it’s funny-looking, cute and teeny-tiny to the point where it almost gets you thinking it shouldn’t exist. Or, at least, that it shouldn’t exist as an actual car for grown-ups. It’s a MINI cut in half. Because MINIs are too big anyway.

The HaHa has a history as impressive as the fact it was ever brought into existence: it is the first-ever creation of builder, designer and car customizer Andy Saunders. He came up with the idea for it when he was a bored 19-year-old student and he completed the project in 1983, with help from a group of like-minded friends. This makes the HaHa 37 years old as of the moment of writing, and yes, it still runs.

According to Andy Saunders himself, because of its diminutive size and front-wheel drive, the HaHa was able to do wheelies even in reverse. Today, it has a 1,300cc engine after it’s been fully restored and repaired, and the current owner is yet to say anything about this impressive feat.

The video below includes interviews with both Saunders and Andy Shaw, who bought the HaHa and eventually restored it. Saunders sold off the car in the late ‘80s and it went on display at the Motorworld Museum in Portrush, Northern Ireland. When the museum shut down only a short time later, the MINI was abandoned, and then changed hands three more times before Shaw came across it.

Because, back in the ‘80s, the HaHa was a very, very famous car in the UK, he recognized it right away, so he bought it and set off to repair and restore it. He had his work cut out for him, he recalls: the MINI was a mere rolling chassis with no windows, no engine, no interior and with plenty of damage to everything but the body.

Come to think of it, this was the most important part: that the shell was still in good condition. Shaw replaced everything else and has now made it his mission to show the HaHa to as many people as possible, because this is the kind of car that deserves to be in the spotlight.

The idea was to create a car that could still serve as a daily driver, even if was half as small as an already very small car, the MINI. Saunders never imagined his MINI would become famous but, in retrospect, he’s happy that it did because otherwise Shawn wouldn’t have rescued it.

“I stripped the car down to a bare shell, sprayed the car then put it all back together again,” Shawn recalls of the challenging restoration. “As far as how much it cost I have no idea because I just wanted to restore it gradually – I have no idea what it cost.”

Saunders calls it a “full concours restoration,” down to the refreshed, bonkers paint job that perfectly matches a mini-car called HaHa. He also says his is the first English custom car to receive this treatment, which (naturally) is an honor to him.

And here’s the craziest part: there are three such half-MINIs out there, though this is perhaps a lesser-known fact. Due to the HaHa’s popularity in the early ‘80s, Saunders built two more: one is in Scotland and the other has crossed the pond and is living the great American dream in sunny California. 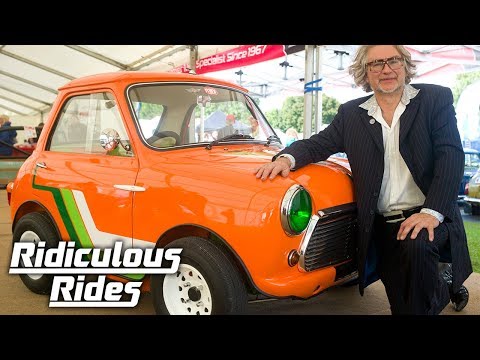 Riva 86 Open, a Luxury Yacht With the Heart of a Drop-Top Sports Car