5 Tesla Drivers Need to Get Off Their High Horse: They're Human After All
Up Next

2019 BMW Z4 M Not Happening, Z4 M40i Competition Package Will Have To Suffice

Home > News > Concept Car
Vlad Mitrache
Like it or not, it looks as though you're in for a bit of Tesla Semi overdose today. It's not just Elon Musk who decided to show the electric truck some attention, but also Jan Peisert, a very talented guy specializing in automotive renderings.
1 photo
We've featured Jan's work before on our website, and this isn't even the first time he's applied his Photoshop skills on a Tesla product. Earlier this year, he used the very limited information available in the Tesla Model Y teaser and used it to create a possible design for the company's electric crossover.

With the Tesla Semi, though, he had a lot more to work with. Provided that singular picture of the alleged prototype turns out to be accurate, his rendering of the electric truck might just be spot on. Between that distant shot and the darkened teaser released by Tesla - as well as the existing passenger cars - there is plenty of information to make an educated guess about the truck's appearance.

In fact, you could say that all he's had to do was paint a hi-res version of the Semi over the existing image and you wouldn't be far from the truth. However, that doesn't take anything away from his work and doesn't change the fact it's the first time we've had the chance of looking at the electric truck in such great detail.

Not that there is much to look at, and by no fault of Jan's. The Semi might just be one of the most featureless vehicles we've seen lately, with just a few creases disturbing the wide surfaces of its body. The fact that the tine headlights were the element that gave Jan the biggest headaches should be quite telling.

The Semi reveal has been pushed back for a second time and is now scheduled for November 16. Elon Musk suggested it wasn't because of any problems with the project itself, but rather other things requiring the full allocation of company resources, including himself.

With a little over a month to go until the official reveal, we doubt we'll get another spy shot of the battery-powered truck, so this rendering is probably the best thing we've got. We suspect (and hope) the actual design will have a less friendly attitude, but other than that, you could say it's November 16 already. 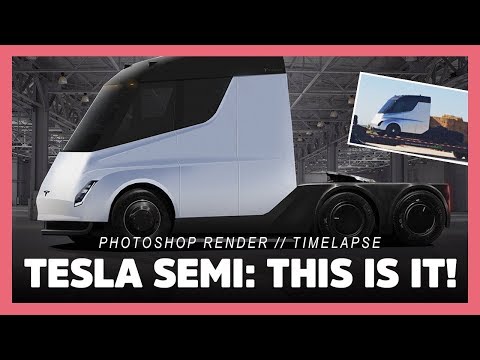