Vlad Mitrache
The greatest drag races usually happen at dusk, when the team is done with everything it had planned for the day and is up for a little fun. When you have a selection of fast cars, an empty track, and a bunch of people with cameras already in place, it would be a shame not to have a massive race involving every available vehicle, wouldn't it?
7 photos

With the sun rapidly setting, there isn't too much time left for thinking. Or for taking doubles. There is also no room for mistakes - make one, and the race is lost. Obviously, nobody really loses anything, but the drivers must be aware of the burden that sits on their shoulders: they each represent the fan group of the respective brand whose car they're driving.

If the drivers don't necessarily care about winning, the same can't be said about the people sitting in front of the screens, rooting for their favorite. Yes, this is pretty much like watching a game of football, except instead of two teams battling it out on the field, we have five doing their thing on a track.

In the order they're lined up for the race from left to right, we're looking at a Tesla Model S Performance, a Lamborghini Huracan Performante, a Porsche Taycan 4S, a McLaren 540C, and an Aston Martin DBS Superleggera Volante. That's an average of over 600 hp and, despite two of them being EVs, six cylinders per car.

Looking at the roster, one can immediately single out the two most likely to win it: the Lamborghini Huracan Performante with its 640 hp V10 engine, and the Tesla Model S Performance with its ability to dart off the line as if traction were something you could just pluck out from thin air.

With the Taycan being only the 4S entry-level version, the Porsche is surely going to lose to the Model S, and since the McLaren 720S can struggle against the EV as well, that means the inferior 540C doesn't stand a chance. Besides, the 540 hp and RWD of the McLaren don't exactly compare favorably to the Performante's AWD and 640 hp either. 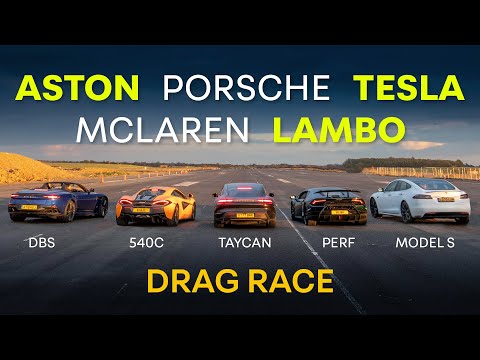 Editor's note: We love it how every video featuring a Tesla defeat has to include a little disclaimer, just to make sure the organizers don't get murdered out in the comments. Not that a few sensible words will have any impact on upset Tesla fans, but it's always worth trying.