The TT RS and the RS3 Sedan are the only RS models that use Audi's iconic five-cylinder engine, with all the others opting for V-shaped engines with either six or eight cylinders.
6 photos

Engines with an odd number of cylinders are a rarity as it is, with the low-end three-bangers being among the only ones still flying the flag, but these two Audis stubbornly refuse to give up on this layout and go for something more conventional.

It'll be a sad day when they do because no one really expects these relatively small cars to house a V6 under their hood, which makes a four-cylinder the only viable option. Power-wise that wouldn't necessarily be a bad thing - just look at the 421 hp Mercedes-AMG gets out of its two-liter unit in the A 45 S hatchback, which is 21 hp more than the output of the current 2.5-liter five-cylinder engine from Audi.

It's actually the loss of character the fans of the brand fear, which, unlike power, is not something you can buy off the aftermarket. The sound test between these two cars provides a very good insight into what that's all about: give them both a sound and see which you prefer. The meaty yet natural TT RS that lets the five-cylinder express itself, or the pops and bangs of the RS3 Sedan that even a four-cylinder could have made just as well?

When it comes to digging in and going fast, there's actually very little between these two. The 400 hp output of a stock TT RS Coupe seems like a distant memory as Chaz's Audi now packs 620 horsepower thanks to a series of mods mentioned in the video.

Corey's RS3 received a similar boost, upping the power to a claimed 685 hp, but the sedan also carries a 100 kg (220 lbs) weight penalty. Obviously, they both have Audi's quattro all-wheel-drive system and, just as importantly, are both fitted with a seven-speed dual-clutch transmission.

That means other than tires, drivers, aerodynamics, a bit more power, and a bit less weight, there's really nothing else separating these two. Closely fought battles are always the most interesting, and this one makes no exception. See for yourself down below. 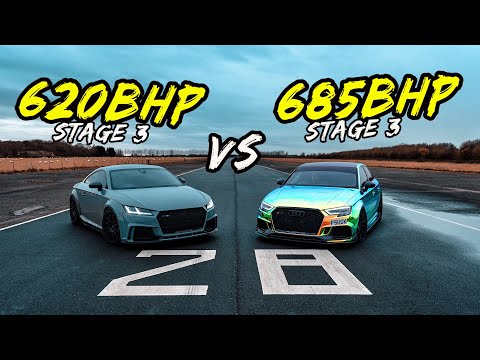