5 Elon Musk Posts a Tweet That Really Doesn't Do His Intellect Any Justice
Car video reviews:
Up Next

One of the early criticisms leveled at Tesla's Model S was that while its straight-line performance was great, it was too clunky and prone to overheating to be any good on a racing track.
5 photos

Then came the Model 3 with its smaller frame and lighter weight, not to mention more advanced battery temperature management, making circuit laps not only possible but also quite a delight. As it turns out, the low center of gravity of the EVs gives them excellent handling abilities, enough to hide their otherwise more than considerable mass.

The Model 3, however, wasn't without its faults, especially when it came to lapping the famous northern loop of the Nürburgring circuit. The extended abuse commanded by the challenging track proved to be too much for the Model 3 Performance's brakes, therefore any track-oriented upgrade designed for the electric sedan should focus on beefing up its stopping power before anything else.

We have no info of what exactly had been modified or replaced on the Model 3 Performance you'll see running around the Nordschleife in the clip below, and that's because the run itself was part of the testing phase for a mysterious new package. The bundle is being developed by Raeder Motorsport and, according to the man driving the car, it'll be available globally and cost under $6,000, installation included.

Speaking of the driver, he's none other than Sebastian Vittel. No, that's not a typo, it's his actual name. And yes, we know he's not the Formula One driver, but he's actually even more relevant to fast Tesla driving than the German F1 maestro, believe it or not.

Back in September last year, Tesla was engaged in a hot lap record contest with Lucid Motors as both companies were touting their upcoming performance EVs, the Model S Plaid for the former and the tri-motor Air for the latter. One key point in the battle was Tesla's quick correction of Lucid Air's Laguna Seca record lap time with its own personal best of 1:30.3, a full three seconds faster than the competition's.

The man driving the Model S Plaid for that record lap was Sebastian Vittel, and it looks as though his ties with the American EV maker have remained strong, even though this time he's actually helping a third-party company (Raeder Motorsport) with the development of the Model 3 Performance unofficial track package.

Details on the mods should become available later this year once the testing phase is done and the team settles on a final form for all the parts and tweaks (this is just the first test lap). According to Vittel, it's "only a few basic stuff, simple, safe, efficient, and fast". Not a bad series of attributes, especially for no more than $6,000. 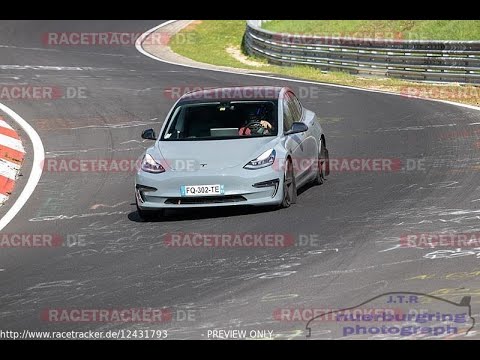