3 2021 Dodge Durango SRT Hellcat “Excess” Review Has It All, Including McDonald's

5 Challenger Super Stock Gets Reviewed and Compared To a Toddler Having a Tantrum
Car video reviews:
Up Next

In a world where sports celebrities keep their adventurous persona with an off-road-prone Rolls-Royce vehicle and singers give their significant others no less than five SUVs for Christmas, you know that price tags are the least concern. Or so we thought, before Throttle House decided to review the 2021 Mercedes-Maybach GLS600 against a Rolls-Royce Cullinan.
34 photos

They’re both menacingly black, they both have the option to go off the beaten path (with care and style, of course), and they’re both utterly expensive as they represent the very pinnacle of adventurous options from their respective ranges.

And they probably both owe their existence to customers around the world who didn’t consider the Bentley Bentayga ugly enough to get their downvote. But we digress. So, let’s get back to the latest episode from the Canadian YouTube channel, which this time around isn’t about sibling rivalry like that 2021 BMW M3 encounter with its E90 predecessor.

Instead, we’re in for a much more refined experience... though not necessarily when these two giddy hosts are around. Otherwise, there might be more cringy jokes about the way Rolls hides the Spirit of Ecstasy inside the hood when someone tries to grab it and the Maybach doesn’t...

That moment – which may or may not be anyone’s cup of tea – comes early on during the presentation so we can all just skip to the part where James Englesman and Thomas Holland, the hosts, actually become a bit more serious. Not much, but just enough for us to grasp the particularities of being in a Cullinan and a GLS600, all in the same day.

The Rolls-Royce driving part kicks off at the 2:38 mark after we’ve seen the quick presentation of both and start to indulge in what brings to the table one of the snazziest luxury SUVs available on the market today. Including the fact “there’s just an off-road button” and nothing else to highlight the adventurous ambitions.

But it’s probably their philosophy, and Rolls-Royce might consider this enough. Mercedes-Benz, on the other hand, has pretty much gone overboard in terms of features, and even comes with a TikTok-worthy “bounce feature” that should provide assistance in tricky situations while off-roading.

Instead, we’re just allowed to imagine the ample possibilities of use outside of this scenario from the 6:25 mark before the two guys actually embark on the GLS600 journey to see if this V8-totting machine (as opposed to a V12 like in the Rolls) really has “more personalities” because of the abundance of modes.

After playing with some of them, they arrive in the same place for the static showdown from the 13-minute mark. After we see them discover all the bells and whistles, there’s the conclusion from the 28-minute, which is also the moment when we really start asking ourselves: isn’t the Maybach more than enough ultra-luxury SUV against the Cullinan, which is more than twice the money? 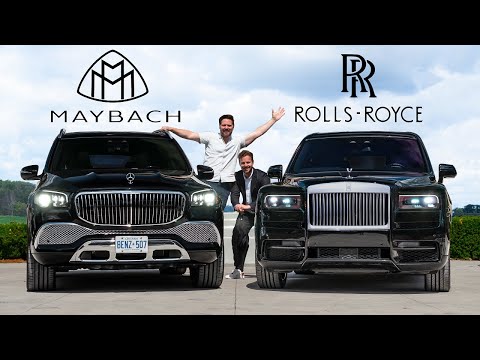