Daniel Patrascu
It may seem like we’re crawling to get there, but the first-ever orbital flight of the SpaceX Starship is now closer than ever. And we’re pretty sure that's so, because Elon Musk bragged about it on Twitter.
6 photos

With most of the space-loving world focused on the upcoming Falcon 9-based launch of “the first privately-led Japanese mission to land on the lunar surface,” HAKUTO-R, SpaceX announced it conducted a long-duration (13 seconds) static fire of Starship Super Heavy Booster 7, the one that will eventually fly Ship 24 to orbit and to prove Musk’s Mars rocket works as advertised.

Booster 7 uses a total of 33 Raptor 2 engines, but during the November 29 test at the company’s Starbase in Texas only a third of them were fired. We are not given any specifics on how it went, but Musk said it represents “a little more progress to Mars,” so if that means anything…

At the time of writing there is no definite date on when the Starship will take off on its first orbital flight. Before getting there, we do know at least two more static fire tests of the Booster 7 will have to be conducted.

When eventually ready to lift off, the 33 raptor engines pushing the thing up could make it the most powerful rocket ever flown, more powerful even than the recently departed Space Launch System, which kickstarted the Artemis Moon exploration program.

Booster 7 will have on top of it Ship 24, it too powered by Raptor engines, but in its case we’re only talking about six of them.

When the flight is cleared for departure, the mission profile calls for Booster 7 to get Ship 24 to the right height for it to continue an orbit that’ll take it from the Texas launch site to the waters off Hawaii for splashdown. The booster itself is of course supposed to return and land in its designated pad. 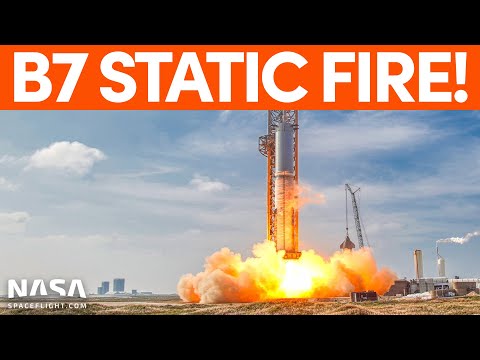