5 NASA-Styled Starship Rendering Is Quite the View
Coverstory

Home > News > Videogames
Cosmin Vasile
Colony sims are a very special gaming genre since they usually project humanity’s dreams of conquering the stars. Jumplight Odyssey piggybacks on that dream and puts players at the helm of a unique starship as it flees its destroyed homeworld. As expected in these games, your main objective is to save your people and lead them to the “Fabled Star.”
7 photos

Although it’s more of a management type of game rather than an exploration one, there’s a big chunk of exploration that you’ll have to do to reach the end of the journey. You’ll be charting a course forward, jump to mysterious new systems, but you’ll also have to recruit crew members and continue to upgrade the ship’s interior, all the while avoiding space pirate attacks, black holes, and the pursuit of your archnemesis, Admiral Voltan, as well as the warmongering Zutopans.

Closer to the roguelite colony sim genre, Jumplight Odyssey is inspired by classic 70s sci-fi anime. Your starship, suggestively named Hope, is the stage of many meaningful, emergent moments as relationships between your crew members develop, and tragedies strike.

Each new system that you’re jumping to features different biomes with unique challenges and resources to harvest. To survive, you’ll have to assign crew members to away missions to survey for resources, send out resource extraction or salvage missions to restock your supplies, and rescue other survivors.

Throughout the journey, you’ll encounter aliens, combat against space pirates, and fight Zutopans pursuing the ship’s course toward the Forever Star. Each decision you make will play into the crew’s ultimate success, but even if you fail, it won’t be the end. Since this is a roguelite, the game is designed around multiple runs, so you’re encouraged to learn lessons from previous runs. 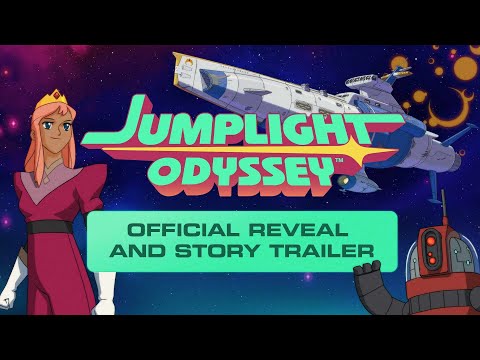