5 Star Citizen Players Overdose Each Other with Healing Injections After Controversial Patch
Car video reviews:
Up Next

Valentino Rossi’s New Yacht Is the Perfect Glam Lifestyle Toy, a Crossover for the Sea

Star Citizen’s Holiday 2021 main event is going live this week, alongside many improvements and a brand-new ship. All the new content revealed comes by way of the Star Citizen – Alpha 3.16 update, but Cloud Imperium Games (CIG) teased the upcoming release of another update for the end of January, ahead of the next Alpha 3.17 update.

The highlight of the Alpha 3.16 update is the fan-favorite PvP event Jumptown, which has been reworked and improved to make it more fun. Dubbed Jumptown 2.0, the current event is inspired by a popular PvP community event where players fight over valuable drug resources.

More importantly, the new PvP event brings large-scale battles to Star Citizen. During the event, both Lawful and Criminal players will race to battle over control of valuable drug crates at various outposts in the Stanton system.

As mentioned earlier, the PvP event has been overhauled to make it more interesting, and one of the changes concerns the Drug Lab building, which has been considerably fortified. Also, the updated Drug Lab location features new cover options, hiding spots, and roof access to offer players more infiltration options.

Also, players will now have to bring a Multi-Tool with a tractor-beam attachment to get the bulky SCU containers on the map. To get started with the PvP event, simply open the Mission Manager and navigate to the Priority category. You can choose the lawful path from the General tab or the unlawful one from the Personal tab. That way, you’ll receive both the coordinates of the drug lab and where to sell the packages.

The next step is to actually fly to the lab, which will be marked on the HUD and the Starmap. One thing won’t change: the drug lab will always be in Crusader, microTech, or ArcCorp space. Depending on which side you choose (lawful or unlawful), you’ll have to take the drugs to the corresponding LEO stations.

The main objective in the PvP event is to find the drug spawner inside the lab, which will pump out one box of contraband every 30 seconds. Keep in mind that the times will only start after you grab the previous box.

Star Citizen’s new Jumptown 2.0 event will run for more than two weeks during various hours. You can find below the holiday schedule for the PvP event:

A new combat-ready dropship is out just in time for Jumptown 2.0
Moving on to the next big thing included in the update, the new Drake Cutlass Steel dropship is a variant of the Drake Cutlass, which replaces cargo capacity with room for 18 jump seats to transport troops to the frontlines of battle as well as weaponry and missiles.

The new combat-ready Drake Cutlass Steel dropships come with 13 guns, ample missiles, and the ability to carry over 20 personnel into battle zones. It’s also important to add that 5 of those 13 guns are modified GT-210 Yellowjacket anti-personnel Gatlings mounted to its doors.

If you’re into combat missions and you’d like to own the Drake Cutlass Steel, you can purchase it right now for $250, or you can grind and buy it with in-game credits.

But wait, there’s more! Alpha 3.16 introduces several important tweaks to the law system, including a rework of the friendly-fire system. The purpose of these tweaks is to make group play more fluid and enjoyable. Some of these improvements include the ability to lawfully defend friends without being fired on first, victim names in infraction notices, and accidental missile locks not adding a full CrimeStat.

Also, expect some revamped visuals for Arena Commander’s Dying Star, along with an increased play area and reworked boundary at the edge of the map.

Finally, Star Citizen’s Alpha 3.16 update adds some important improvements to Grav-Lev and atmospheric bounties. The former has been completely reworked, so players using hoverbikes should notice major improvements to handling and stability.

As far as the atmospheric bounties go, Star Citizen players role-playing as bounty hunters can now pursue contracts above the caves on microTech, outposts on ArcCorp, and more with new bounties across Stanton, including targets hiding in-atmosphere across all of the system’s major planets. 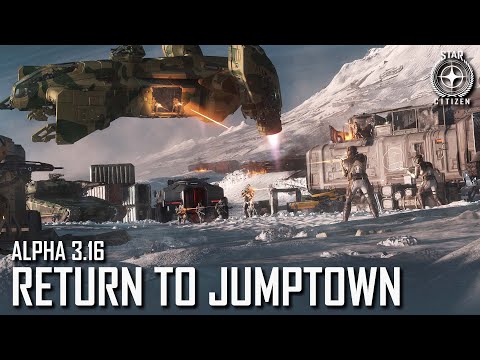