5 Skoda Kodiaq RS Pickup Is a Rendering Abomination
Car video reviews:
Up Next

This is one of the weirdest drag races we've seen from Carwow magazine, but it was still very enjoyable. If you want a theme for it, it's wagons vs. crossovers, sort of like aliens vs. predators.
3 photos

The star of the show has to be the Skoda Kodiaq RS. Even though it's the first Skoda performance SUV, people haven't put it to the test with some propper drag racing. The 7-seat family car is powered by a 2-liter diesel engine with two turbochargers making 240 HP and 500 Nm for the AWD system to shuffle.

It has no direct rival here, but we were curious how the Kia Proceed GT would compete. You see, in an acceleration test, this shooting brake powered by a 1.6-liter turbo went under 7 seconds during the standard sprint. That should mean it's faster than the Skoda, but Mat Watson got a bad start.

We're surprised Carwow didn't do second race, but the outcome here is less important than Lamborghini versus Tesla or McLaren. Still, we were rooting for the 204 horsepower Kia. It won the rolling race because the torque of the Skoda wasn't impacting the outcome. Did we mention it's about a third cheaper and way more handsome?

There's another wagon on the track, and that's the new Ford Focus. Under its hood is the same 1.5-liter turbo as in the Fiesta ST, but it's only making 182 horsepower.

It's a decent family tourer, but if you're after sportiness, Ford makes and sells two ST versions in this body style, one powered by a mighty 2.3-liter turbo. Lastly, there's the Audi Q3. With Turbo Blue paint, it looks fast. However, the 35 TFSI badge reveals that a 1.5-liter turbo resides under its hood, making only 150 HP and 250 Nm of torque.

A crossover with front-wheel-drive and a small engine isn't going to win anything, but this is still the engine Carwow recommended buying. Guess drag racing is not a priority for Q3 owners. 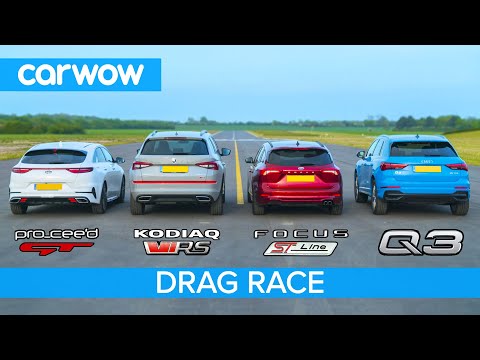