The Kodiaq was a gamechanger for the Czech carmaker Skoda. It was a mid-size SUV with room for seven offered with various powerplants and drivetrains that placed it at the same level as other European brands. It was built on an extended Volkswagen MQB platform, the same used for the Tiguan Allspace.

With the 2021 range, Skoda introduced a new set of slimmer Matrix LED headlights on its biggest SUV on the market. They were standard features on the full-options trim level L&K (Laurin&Klement) and on the sportiest version, the RS. Its more upright grille made the car looks rougher than before, able to cope with difficult off-road situations even though it was more of a mall-roader than an off-roader. On its sides, the black moldings around the wheel-arches added more protection for the bodywork. The carmaker introduced a new set of 20” light-alloy wheels on the options list.

Inside, the Kodiak featured new upholstery options and contrast stitchings for specific versions on the seats and dashboard. Depending on the trim level, two or three-spoke steering wheels were fitted as standard. The carmaker offered a ten-speaker Canton sound system as standard on the L&K trim level or optional for the rest of the range. Its infotainment unit was equipped with a standard 8” touch-screen with an option for a 9.2” display. Skoda included a 10.25” TFT display for the instrument cluster as an option.

Under the hood, the carmaker introduced two turbo-diesel and three gasoline options, all turbocharged. The entry-level 1.5-liter gasoline was the only available with a front-wheel-drive and a six-speed manual, while the rest of the powerplants were paired to a seven-speed (dual-clutch) gearbox and all-wheel-drive. 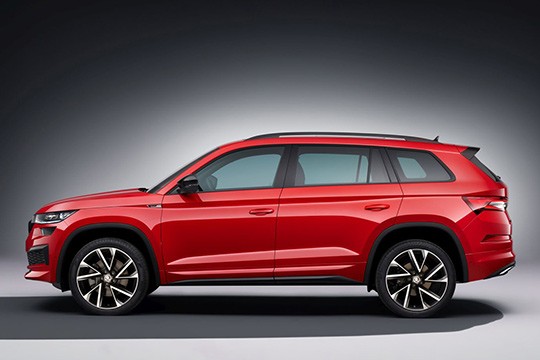