2 Dashcams Can Catch Accidents as Well as Migrants

3 Semi Cuts a Corner, Very Nearly Cuts Short the Life of a Family Too

5 If Audi Did Trucks, We Wish They Looked like These Two
Car video reviews:
Coverstory

Ever wondered why 18-wheeler drivers aren't in the mood to take crap from anyone else on the road? It's because when they get to their destination, instead of a simple parallel parking, they have to do stuff like this.
4 photos

It takes a lot of skill and experience to drive a semi, and it takes even more to be an actual good semi driver. Ask anyone who's never driven an articulated vehicle to reverse even a small car with a tiny trailer, and you'd better have your phone ready because it might make for a funny video.

There's nothing funny about what's going on in this clip. The driver filming all the action was trying to park his rig with an empty trailer between two loaded ones to keep it from being knocked over by the storm that was on its way. A very sensible decision since we all know how well strong crosswind and tall, light trailers go together.

He was told to pull his container in a certain position, but it's safe to say the yard administrators did not take the time to measure the distance between the two parked trailers. However, the man wasn't going to let anything stand in his way. Most of us would have turned back and asked for a different spot, but he was determined to work with what was at hand.

That, as it turned out, was only a couple of inches on each side. It's the kind of small margins that would give serious headaches to most passenger car drivers, let alone something as big as a tractor trailer. On the other hand, these big rigs have the advantage of a perfectly rectangular shape and flat surfaces: you don't get any surprises.

Half-way through the maneuver, he gets out to check whether there was any risk of hitting the stairs of the vehicle to his right. He then realizes he won't be able to turn the tractor head if he reverses any further, so he decides to pull out and have another go. Frustrating? Maybe, but not for this guy.

Sadly, there wasn't anyone there to film the actual maneuvering, so we don't get to see it, nor do we know how long it took. However, with literal inches either side, it would be quite impressive even if we were talking hours, which is obviously not the case. OK, this has gotten me into the mood for American Truck Simulator. 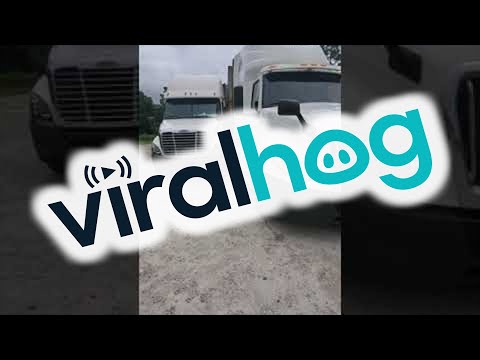