3 Semi Cuts a Corner, Very Nearly Cuts Short the Life of a Family Too

4 Daimler Showcases Its Most Avanced Truck Ever, The Freightliner Cascadia

Dashcams Can Catch Accidents as Well as Migrants

In case you haven't switched you TV on for the past few years, Europe is currently facing with a surge in the number of illegal immigrants that seek to get to one country or the other.
5 photos

There are your transit countries such as Greece, Bulgaria, Romania, Serbia or Hungary, for example, where nobody wants to stay - and why would they, when Germany, the United Kingdom or Sweden are just a few more miles away?

The authorities in all these countries tackle the problem in different ways: some have erected fences along their borders, others are putting the police on high alert, most of them simply don't do anything while others seem to have the situation out of control.

One such example is France, where the highway leading up to Calais is looking like a war zone. Why is that region in particular so important, you might ask? Well, it seems that France isn't good enough for some people, and they want to get to England instead. And since they're not in the situation to go to the Charles de Gaulle Airport, buy a ticket to Heathrow and sip some wine as they fly over the Strait of Dover, they need to look for alternate transport means.

And those means come in the shape of the thousands of trucks that use the Eurotunnel to get from France to England. Hundreds of people line up the highway and do whatever it takes to get on those semis. Sometimes they lay out barricades to stop the vehicles and gain enough time to climb aboard. Other times, though, they get violent, pelt the trucks with rocks and do all sorts of things that catch the police's attention.

We've seen a lot of strange things happen in roundabouts thanks to dashcams, but nothing as bizarre as this. This English driver caught the moment when a semi passes through the intersection with two people, probably males, on top of its trailer. It's very likely that only a few hours earlier, they were trying to hitch a ride in Calais just like the rest of the hundreds of migrants camping near Calais. Presuming they don't fall off before the truck stops, they were among the lucky ones. 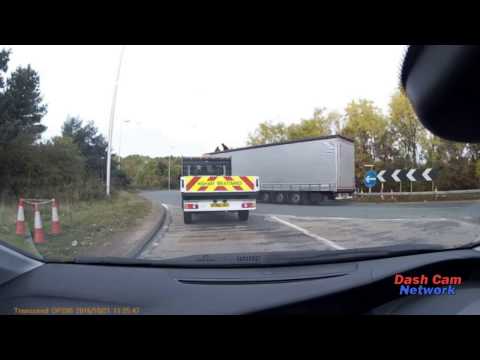