2 If Audi Did Trucks, We Wish They Looked like These Two

5 And This, Kids, Is Why Double-Overtaking Two Trucks Is Always a Bad Idea
Car video reviews:
Coverstory

Semi Cuts a Corner, Very Nearly Cuts Short the Life of a Family Too

They never taught us to cut corners in driving school, but then we watched a motorsport event on a track and, all of a sudden, we started thinking about apexes and racing lines whenever the road in front of us stopped being straight.
1 photo
And that's not necessarily a bad thing. Staying in your lane is never the best way to navigate through a bend. By cutting the corner, you can maintain more of the speed you had going in throughout the maneuver, which means less time spent and less fuel consumed. It also makes for a much smoother ride as you don't have to brake that hard and you can also go easier on the steering wheel.

However, while it may be better for the one who does it, it can be pretty unnerving for those coming the other way - which is why this shouldn't really be done in a left-hand turn if there are any cars in the oncoming lane. And if you're driving a truck, that's twice as important.

This video shot in Canada shows one large semi do just that. It only just crests the marking on the pavement with its wheels, but given the speed and the size of the vehicle, it makes it look that much more dangerous. The dashcam car driver moves over to the right even though he probably could have stayed on course and nothing would have happened, but you can't blame him for wanting to make sure.

After all, he was traveling with his family, which included one child. He can be heard telling his father to watch out as the semi approached, which goes to show that you don't need to have a driver's license or the age to be allowed to hold one to realize what is dangerous and what isn't.

I would also like to point out the very calm nature of the whole event. The driver asks his wife whether she saw what had just happened, and she casually replies that she did. If that were my wife, she'd be clinging on to the inside of her door like Spiderman and I would be very surprised if she didn't scream a little as well. As for me, I would probably be swearing, kids in the car or not. I don't know, it's probably that beautiful scenery that calms everyone down. 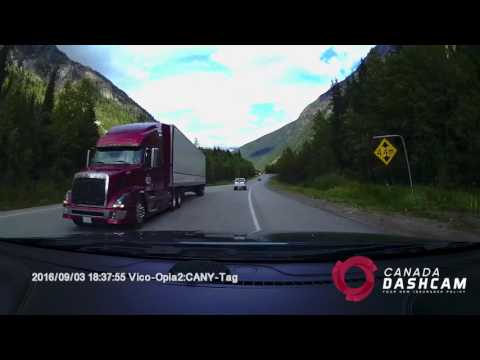