2 Tesla Model S Hits the Back of a Bus in Newport Beach: Autopilot May Be Involved

Cosmin Vasile
Few other games have been pushed onto so many devices that can run a piece of software and have a display like Elder Scrolls V: Skyrim. Sonic the Hedgehog is one of those games that everyone can enjoy on almost every platform, including, starting today, Tesla cars. That’s certainly one of the platforms where Bethesda’s critically acclaimed open-world action RPG hasn’t made its debut yet.
6 photos

If you’re a Sonic fan, get ready since SEGA announced a partnership with Tesla to add Sonic the Hedgehog 1, the game that kicked off the beloved series, to Tesla Arcade. The game will be available for both existing and new Tesla models via the built-in display screen.

Players will have the option to use a handheld controller connected through the car’s USB ports to better perform in the game, or you can just use the touchscreen controls on the dashboard. SEGA’s official announcement is pretty clear regarding the target of the game:

“Passengers turn into players as they race at lightning speed across classic zones to defeat enemies on a mission to save the world from the evil Dr. Eggman, all in the comfort of their own car!”

Despite Tesla warning players that “use of Tesla Arcade while the vehicle is in motion is only for passengers,” no one can stop a driver to play games. Even if a passenger decides they want to play a game on Tesla’s in-car gaming console, there’s a high chance that it will create a distraction for the driver.

That being said, if you’re determined to engage in some entertainment while in a Tesla, make sure that your car is not in motion regardless of whether you’re the driver or the passenger.

With the addition of the original Sonic the Hedgehog, Tesla Arcade’s games library now features 20 titles, specifically curated for all tastes. But we’re pretty sure that’s just the beginning knowing how much Elon Musk loves games. 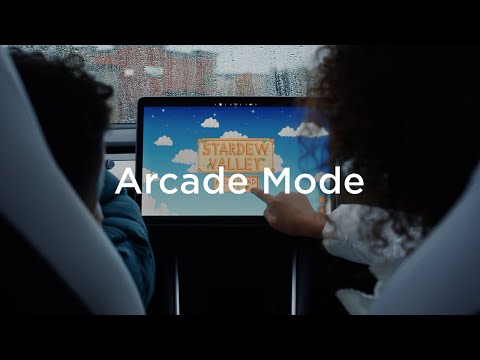