Having been retired by the M8 a few years ago, the BMW M6 isn’t part of our daily vocabulary anymore. That is rather sad, considering that it has aged nicely and that it is still very fast. But don’t go grabbing the tissues yet, as this isn’t a teary story.
6 photos

Quite the opposite, in fact, because we are about to see an uber-fast example put blue-blooded exotics in their corners. Hold on, how can an executive model beat supercars, you ask? Well, it has a big ace up its sleeve, which is a dizzying amount of power, made possible by HC Performance, according to the video embedded at the bottom of the page.

How much exactly it has on tap is a very good question indeed, though one that will, unfortunately, remain unanswered for now. Still, we are likely looking at well over 1,000 horsepower at the crank, considering that it goes like a bat out of hell. This assumption is backed up by a few stories that we found on the world wide web, from a few years ago, which claim that a Stage 3 M6 modified by HC Performance had a little over 720 hp at the wheels.

With that much grunt, it is no wonder that it simply dominated the improvised drag strip. Not only that, but as we already mentioned above, it also proved faster than true supercars. A Ferrari 488 GTB and a Lamborghini Huracan fell victims to this big bad Bimmer, and so did a slightly less powerful McLaren 570GT. All of them were beaten into submission by the serious M6 and its confident driver, proving once more that you don’t need the latest, greatest, and most expensive vehicles to enjoy superior firepower.

Now, this is the point where we invite you to scroll down and watch the clip, which is a little over two minutes long, so we’d save that bag of chips for a different one if we were you. 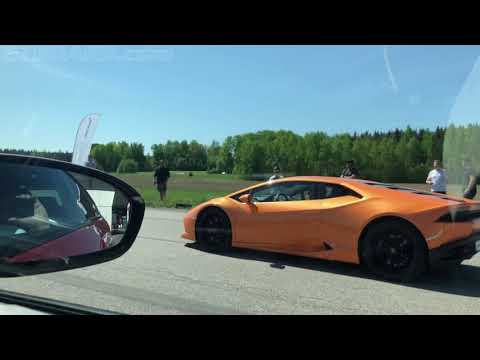