2 Munro Checks Out the Made-in-Texas Tesla Model Y Build Quality, Has a Few Words to Say

Sandy Munro is more intrigued by the Tesla structural battery pack the more he delves into the teardown. After removing the nasty pink foam inside the battery with a dry ice blaster, the Munro team gets more insight into the inner pieces of the pack.
9 photos

At Giga Texas, Tesla has started building cars with the revolutionary structural battery pack and 4680 cells. The new type of battery promised to improve rigidity and energy density and lower the car’s weight compared to the previous battery packs with 2170 cells used in other Tesla vehicles. We’ve found earlier that this is not exactly the case, at least when it comes to reducing weight. But, as Elon Musk said, the 4680 cells are still in their infancy, and we should expect improvements down the road.

Underbaked or not, the structural battery pack continues to baffle Sandy Munro, whose team started a teardown more than three weeks ago. The task proved unbelievably difficult, not only because of the strong steel cover but also because of a pink foam that glues everything together. To get inside the battery pack, Munro and his team had to use a rented dry ice blaster to remove the pink foam. Even so, things are hard to tear apart without destroying evidence.

The most important takeaway from this teardown is that the structural battery pack is like nothing the team has seen before. Aside from the battery cells, the separators, and the conductors, there aren’t many similar parts. For instance, Tesla’s battery completely lacks fasteners as everything is glued together by the very resilient pink foam.

Although there are no distinct modules like in other battery packs, there are four sections clearly separated by what appears to be fiberglass fibrous phenolic barriers. Sandy thinks their role is to prevent a thermal runaway from propagating to other areas of the battery. However, he thinks Tesla’s pack is cleverly made to prevent such a possibility from happening.

Sandy also discusses the possibility of recycling, referring to a recent Elon Musk tweet. Even though the battery pack is built like a brick, it is actually made to be 100% recyclable and in a very straightforward way, no less. “Just think of any battery pack as super high-grade ore,” said Musk, and Sandy Munro explains what he meant by that. According to him, the pack would be submerged in liquid nitrogen, making it brittle and easy to grind. Then the materials are easy to separate based on their different densities, which is why Musk considers them like ore. 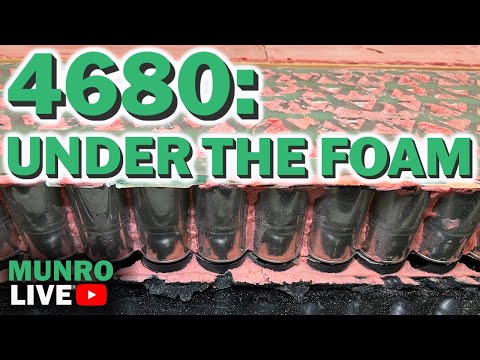