3 BMW Powered Roding is Dressed in Yellow at Geneva 2013

Renault chose the 2015 edition of the Geneva Motor Show for the unveiling of its first-ever C-segment crossover, the Kadjar. We've thoroughly enjoyed reading their press releases, but for a brand new model, the Captur's big brother is somewhat of a disappointment.
14 photos

But we'll get to that later. First, let's point out that the Kadjar looks relatively sexy from the outside. It's built using the same formula Nissan adopted for the Qashqai 2 and is underpinned by the CMF or Common Module Family platform. It will become available with 2 or 4-wheel drive and an engine range that closely mirrors the Qashqai and the Nouel Espace MPV.

According to Renault, the name of its vehicle is inspired by the word "quad", a highlight of its 4-wheel drive capabilities, while "jar" comes from the French words "agile" and "jaillir" to represent agility.

The styling is similar to the Captur, but a bit more masculine. This starts with the LED headlights at the front, the butch grille and the large 19-inch wheels. Its profile is well rounded and flows towards the rear shoulders of the car, which appear muscular from the back. Other things we liked about the Kadjar include the gigantic 1.4 square meter glass sunroof and the sculpted 3-dimensional taillights.

While the exterior is certainly as good as the Qashqai or even better, the interior is a let-down. Just take a quick look at the adjacent photo and tell us if this interior is worthy of a car that goes on sale in 2015. 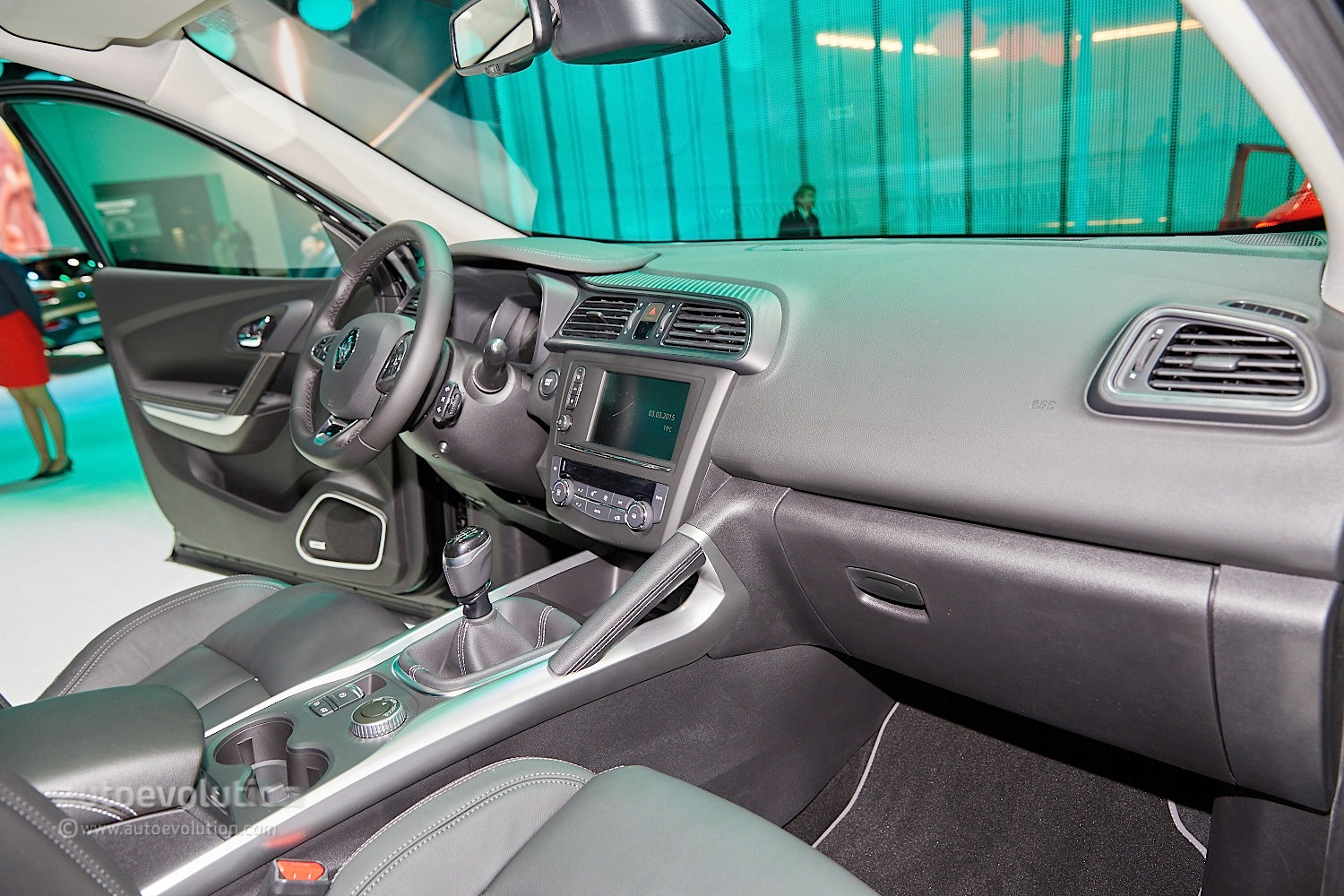 The lines of the glovebox don't match up while the lack of colorful inserts make the sea black plastic depressing and dull.

Renault might have redeemed itself with a digital gouge cluster, but even the Megane has had that for a couple of years. Remember, crossovers have many female followers and we don't think a spartan cabin will appeal to them.

In the middle of the dash sits a new R-Link 2 infotainment system that offers a 7-inch touchscreen display. The Kadjar will also be available with an Easy Park Assist system that can handle parallel, bay and even angled parking situation. A reversing camera and all-round parking sensors are also on the equipment list.

For customers wanting better fuel economy, the Kadjar will be available in FWD form. Two diesel engines are expected to be available and will both deliver CO2 emissions of 99 g/km or below that. Extended Grip traction control will be fitted as standard, which basically uses the brakes to limit wheel slip under difficult conditions.

All-wheel drive Kadjar models will be fitted with the Renault-Nissan alliance ETC system, short for Electronic Traction Control. Basically, this is AWD on demand and sends torque to the back axle when slip occurs at the front. A rotary switch is provided with a "Lock" setting where an even 50-50 torque spit is available at up to 40 km/h. There's also an Auto mode where the car does its own thing and 2WD mode for when you're cruising down the motorway.