The most we've seen of the Ford Mustang Shelby GT500 so far was on the drag strip where its colossal power output and rear-wheel-drive makes for a tough to handle combination.
7 photos

That is particularly true in the standing quarter-mile races. Switch to a longer distance or a rolling start, and there are very few cars out there you would fancy against the GT500 as finding that initial grip through just the rear wheels is taken out of the equation.

Do you know what else does that? Racing the GT500 around a track, which is what the latest Shelby Mustang was actually created for. All those aero elements made out of carbon fiber aren't just for show, and the use of the lightweight material even goes as far as the wheels themselves. If that's not dedication to achieving the best possible performance, we don't know what is.

All these things didn't escape the editorial team at MotorTrend, which has included the Ford Mustang Shelby GT500 in its shortlist for this year's Best Driver's Car award. Getting the title won't be easy, but this lap around the Weathertech Raceway Laguna Seca with racing legend Randy Pobst behind the wheel sure makes a strong case for the 'Stang.

Of course, power is important, but it's actually the way it handles that's the most impressive. Ford Performance didn't just cram as many ponies under the hood as it could and called it a day. No, the chassis, the suspension, and the brakes all come together to make a great and balanced car that will offer both performance and fun around a track.

You know you've done something right when you make Randy Pobst, a man who's seen and done a lot in his lifetime, giggle like a schoolgirl, and he sure does that as he takes the GT500 through another turn on the Laguna Seca and powers his way out of it. The fact he's so relaxed while handling 760 hp in something with very expensive wheels made of glass is testimony to the man's experience and cool nerves.

In the end, the Mustang Shelby managed to beat the previous best time of a pony car, set in 2018 by a Chevrolet Camaro ZL1 1LE (1:34.30), but only by the slightest fraction. We could tell you exactly by how much, but if that meant you skipped on watching the video, we'll do you a favor and not mention it. 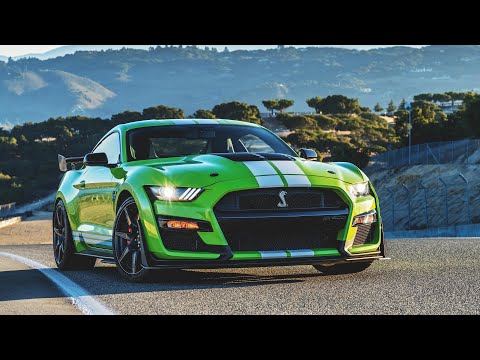