3 Elon Himself Is Approving Tuning on His Teslas, Is Even Excited by Some Tuners

In case you missed it, the Tesla-dedicated tuner Unplugged Performance took a modified Model 3 at this year's Pikes Peak International Hill Climb to compete in the exhibition class.
10 photos

The car's initial outing came during the first qualifying stage, and it couldn't have gone better. The first run was enough to make the completely road-legal Model 3 (albeit with the interior stripped down and a massive roll cage - that will prove its usefulness - installed) top in its class. Even so, Randy Pobst, the team's driver, took it out one more time and managed to improve that time even further.

It was all going to plan. The aim was to achieve a sub-ten-minute climb once the qualifying process was done, but there was one more stage in the way. And it wasn't just any stage: the top part of the climb is where things get truly tricky as the road surface changes from year to year.

However, after the first day, Randy was feeling quite confident. "I don't think I've ever driven a better handling car," he said, and given how many cars he's driven and what kind of cars he's driven, that's indeed very high praise. The very high confidence in the car is probably why he ignored his instincts and went into full-attack mode from the first run early in the morning.

Sadly for him and the team, less than 30 seconds into the climb, just as Randy was guiding the Model 3 into a right-hand turn, the car hit a heave at 68 mph (110 km/h) and briefly took off. Despite the experienced driver's attempts to prevent the crash, the Model 3 hit a wall before coming to a halt on the rocks next to the road.

You can almost feel Randy's disappointment as he slams his hands on his lap knowing it was probably all over, and the Unplugged Performance team must have felt the same way. Of course, you can always look on the bright side: nobody got hurt, and they kind of quit while they were ahead.

Not much consolation in the latter, we can imagine, but the first day performance should be enough to show people what Unplugged Performance's Ascension-R package can do for the Tesla Model 3, and that's what ultimately matters for them. Besides, not everything is lost yet: the team is reportedly looking to see if the car can be brought back from the dead in time to take part in the actual hill climb. It's hard to imagine, but it would sure make for a hell of a story if they actually managed to pull it off.

Below you can watch a clip from Randy where he explains what went wrong and see the onboard footage of the crash as well. Given how impressed he was with the car, we wouldn't be surprised if we'll see this car/driver combination in the future as well regardless of what happens here, probably setting EV record laps on various circuits around the world. Looking forward to that. 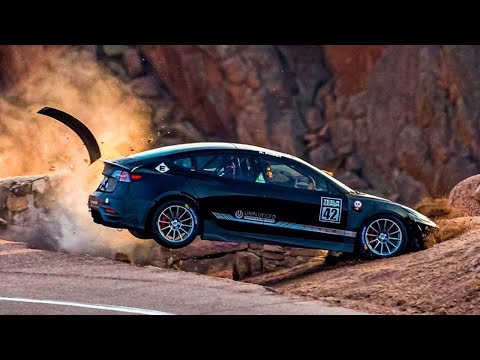