Previewed as a concept in 2016 at the State Fair of Texas, the Ram Rebel TRX Concept was adapted for series production for the 2021 model year. Officially named Ram 1500 TRX, the half-ton truck is rocking the 6.2-liter supercharged HEMI V8 with no fewer than 702 horsepower on tap.
9 photos

Still the most powerful half-ton truck in the United States of America, the worst nightmare of the Ford F-150 Raptor also packs 650 pound-feet (881 Nm) at 4,800 revolutions per minute if you fill ‘er up with 91-octane fuel.

The BMW i4 M50 also happens to be a big chungus despite its relatively small footprint. In this particular specification, the Bavarian automaker quotes 5,063 pounds (2,297 kilograms). The zero-emission chonkster does perform rather well in a straight line thanks to near-instant peak torque.

Although down on power (536 horsepower) and torque (586 pound-feet or 795 Nm), the five-door liftback needs 3.7 seconds to reach 60 miles per hour although it often exceeds the manufacturer’s claim. The question is, can it hold its own against the most badass truck on sale today?

Obviously enough, it obliterates it from a dig. Roman Mica and Nathan Adlen of The Fast Lane gave the TRX a two-second lead on the second run, which is too much for the i4 even though it came close to the TRX at the finish. Had they raced over a longer distance, the BMW could’ve won it.

Speaking of longer distances, the M50 also has the upper hand in terms of top speed. The speedo will stop climbing at the 140-mph (225-kph) mark whereas the blown truck is electronically limited to 118 mph (190 kph). 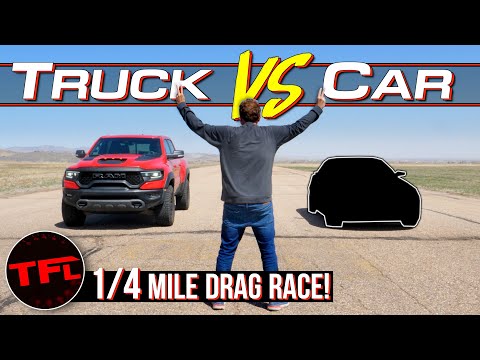