1 This Beautiful Sailboat Got Turned Into an Unconventional Floating Home

2 Modular, Pop-Up Space Camper Turns the Cybertruck Into the RV of Your Dreams

3 Stunning $5.5M Mansion Comes With Its Own Electric Boat, Stored Beneath the Living Room

5 This Floating Tiny Home Can Sail Away, Invites You to Enjoy the Best of Both Worlds
Car video reviews:
Up Next

Chevrolet Seeker Is GM's New Crossover for China, Might Launch Stateside Too

The tiny house movement or downsizing is not for everyone, but for those who dare give either a try, the rewards will be immediate, whether it’s in terms of cutting down expenses or a smaller carbon footprint. Boathouses are also excellent alternatives for downsizing, and Pax is an outstanding example of it.

Pax is a boathouse, but one that stands out from the rest in that it’s inspired by the tiny house movement. It started out as one of the 25 boats built for Expo ‘86, but it was far from its glory days when Jason and Cayley found it docked in Esquimalt, BC, Canada, three and a half years ago. They bought it for less than the asking price of CAD$6,000 (US$4,680 at the current exchange rate) and began the difficult process of turning it into a home.

The result is nothing short of impressive, as you can see for yourself in the Exploring Alternatives video tour available below. Jason and Cayley have used Pax (former Casa Miga) as their own home for a while, but they’re now ready for their next project and, with it, for Pax to move on to someone else. It’s for sale for CAD$289,000 ($225,400), with the price including mooring at Sailor’s Cove marina, in Victoria, BC, and access to the marina facilities.

Those of us who don’t have this kind of money or are not willing to move to another country can only admire it from afar – and maybe find inspiration in it. Even if you don’t have any interest in the whole downsizing trend, you have to admit that Pax is a beautiful and beautifully-crafted space.

Of course, it helped that both Jason and Cayley are skilled with their hands. He is a shipwright and she is a carpenter by profession, with a passion for tiny houses that she’s been able to transfer into the interior of the boat. Some 10 or 15% of the exterior of Casa Miga was stripped and replaced, and the interior is completely new, down to the different layout and, of course, insulation, all new wiring, and plumbing.

In total, Pax offers 377 square feet (35 square meters) of the finished surface, not including the rooftop terrace, and another 24 square feet (2.2 square feet) of deck. It has two levels and a rooftop terrace, which can easily host parties of up to 10 people, and included, until recently, a garden with decorative plants, vegetables, and herbs.

The main level includes the head (the bathroom, as we call it on solid ground), with a gorgeous shower and tub that’s actually an upcycled container used to water livestock, a composting toilet (but there is space for a holding tank), and a sink with vanity with incredible storage capabilities. Opposite the head door is a little nook with more storage for stuff like shoes, clothes, and keys.

This is one of the highlights of Pax, right after the impressive quality work: the way in which Jason and Cayley were able to maximize every bit of space available, which is even more impressive if you consider the fact that there are no corners. Furniture and fittings had to be made custom, specifically for this space.

The galley is the only one that sits in a straight line, so you get a life-size kitchen. It has a propane four-burner stove and oven, a fridge and freezer (hooked to the mains, but Pax also has a large battery pack that can run hotel functions), sink, and a lot of cooking surface. There is space under the foredeck that can be used as a pantry and that the couple used as their wine cellar when they lived onboard because it has no insulation, so it’s colder than the rest of the boat.

The dinette is a work of art, and even that feels like putting it lightly. Jason built the bench and the table himself, and the beauty of the ensemble makes up for the countless hours he spent working on it. There’s storage under the bench and the platform, as well, so this is not a case of looks over function. The floor is hardwood recycled from a bus, dated 1977. The staircase to the second level, built in the manner of those found in tiny homes, integrates storage as well.

Upstairs is a bedroom and a lounge, connected through a catwalk that is open on the side, over the galley. Jason says this space can be further utilized by building a bench, but he’s leaving it as is for now. The bedroom doesn’t have a standing height, but the ceiling is high enough to allow both occupants to rummage through the his-and-hers wardrobes without banging their heads. The lounge has two armchairs and a little bookcase but once held a futon for when guests would sleep over.

The rooftop terrace is accessible through the original wooden staircase, which is also the only element they’ve kept from the old home.

Pax is 30 feet (9.1 meters) long and 12.5 feet (3.8 meters) wide, which means it’s small enough to find docking in marinas where larger boathouses wouldn’t, but because of its layout, it’s very spacious. Jason explains that it’s currently selling with parking, but it can be moved around. It can also be registered and insured either as a boat or as a floathouse, depending on where the next owner plans to take it. 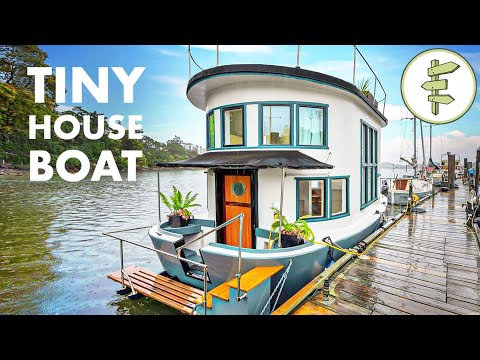